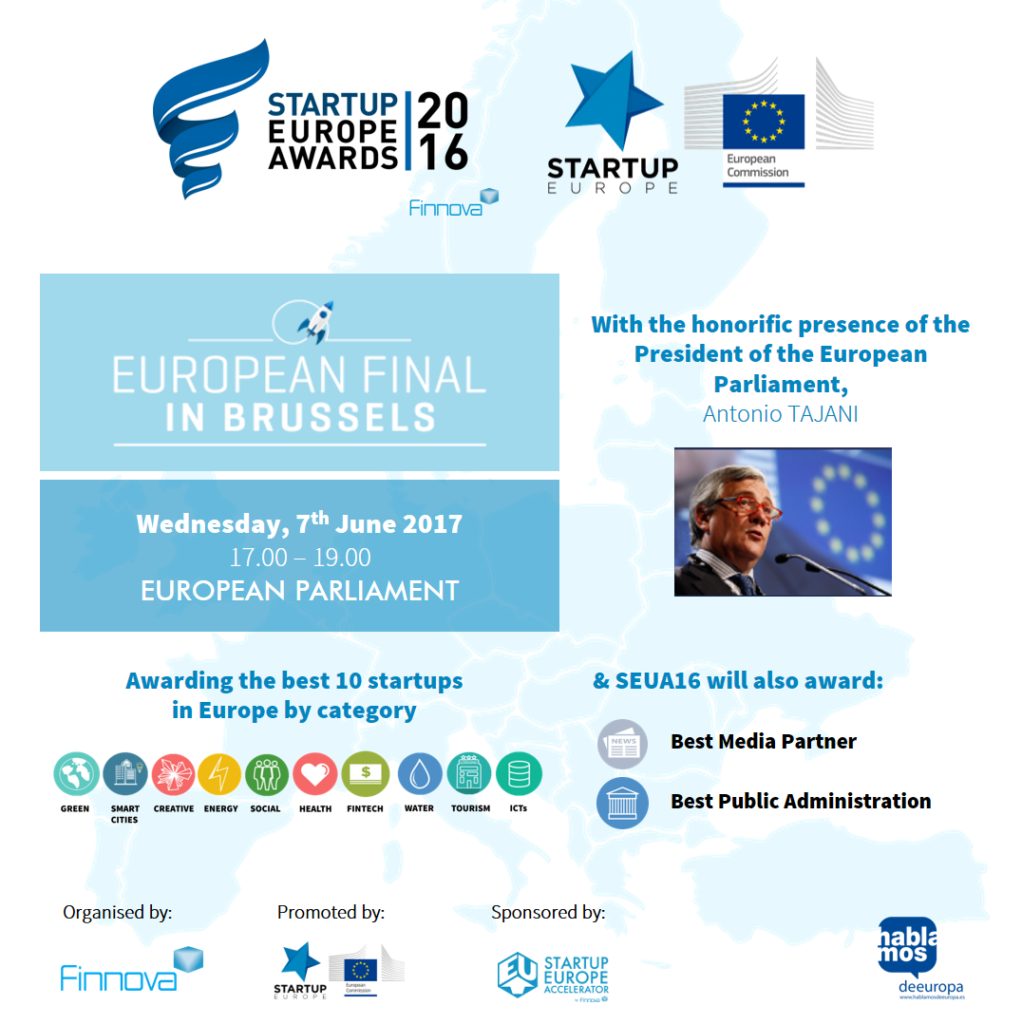 Brussels, 31th of May 2017. The StartUp Europe Awards initiative, promoted by the European Commission and implemented by Finnova Foundation, in collaboration with StartUp Europe, will recognise for the first time the best startups in Europe in 10 categories, in the so-called “Eurovision for startups”. This recognition will take place in Brussels next Wednesday, 7th of June, in a ceremony that will count on the honorific presence of the President of the European Parliament, Antonio Tajani.

The awards will be delivered by the President of the European Parliament, Antonio Tajani; the Commissioner for Research, Science and Innovation, Mr. Carlos Moedas; the Vice-President of the Committee of the Regions, Karl-Heinz Lambert; the Vice-President for Communication of the European Economic and Social Committee, Gonçalo Lobo Xavier and the DG for Employment, Social Affairs and Inclusion, Mr. Michel Servoz.

In addition to distinguishing the best startups from Europe in 10 categories, the StartUp Europe Awards final will also recognise the best Public Administration for the Startups, a pioneering prize which aims to recognise the best programmes or public services supporting entrepreneurs and innovation in municipality, province, region and international organism category. The initiative also recognises the Best Media Partner, a prize that will be given to the media partner most committed to the dissemination of the entrepreneurship and the startups.

Finally, the president of the organisation “Mind the Bridge”, Alberto Onetti, will present in the ceremony the last report of “Scaleup Europe” by Startup Europe Partnership (SEP).  This report includes new data about Scaleups and capital raised in Europe, plus a comparison among regions, countries and sectors. The maturity of the EU scene, the potential impact of Brexit, and recent growth ends the report, along with a survey of the largest verticals present in Scaleup Europe, and which countries these verticals are most represented in.

All the winners of StartUp Europe Awards will obtain great visibility all around Europe thanks to the Media Partner Alliance of StartUp Europe Awards formed by 21 media members. The startups will also have access to a programme of mentoring (in internationalization, European funds like SMEs Instrument of 50.000 € to 2,5 million € of non-refundable subsidy, international communication, etc.), through the StartUp Europe Accelerator of Finnova Foundation, which will allow them to boost their projects and to make them more viable worldwide.

StartUp Europe Awards is an initiative that seeks to identify and recognise local models of success which become an example to other entrepreneurs, to the public administrations for developing custom-made programmes to stimulate its growth and to the investors for approaching local ecosystems.

“From the Commission, we want that entrepreneurship generating growth and employment is not only present in a few cities or regions. Thus, more people can benefit from the impact” assures Isidro Laso, Head of StartUp Europe’s Sector – European Commission.

StartUp Europe Awards also proposes a methodology of open innovation through the public – private partnership, “that works for the public entities to find a solution for its local challenges and for the startups to try its innovations in pilots supported with European funding”, declares Juan Manuel Revuelta, Director of StartUp Europe Accelerator by Finnova Foundation.

More than 20 local events and 14 national awards have been celebrated under StartUp Europe Awards´ frame in 2016, with 91 startups winners and 84 that made it to the final. 21 media Partners of the whole Europe, as The Independent in Ireland or Emprende TVE in Spain, they have helped to give visibility to this initiative. 9 members of the European Parliament have come together in the StartUp Europe Awards as ambassadors, supporting the local events with their presence and following closely the progress of the startups.

StartUp Europe Awards is an initiative promoted by the European Commission and it is supported by the President of the Committee of the Regions, several members of the European Parliament as Ambassadors and implemented by the Finnova Foundation in collaboration with Startup Europe.