Two young people from the Finnova Foundation participated in “Circular and save”, a project organized by Copernicus in Berlin 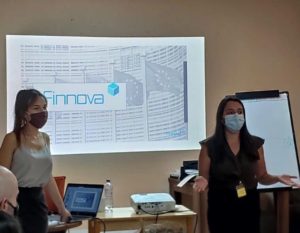 The week of 17-24 August, the German capital welcomed young people from 7 European Union countries (Bulgaria, Belgium, Spain, Italy, Poland, Romania and Germany) belonging to different associations to discuss, debate and learn about the circular economy. Moving towards this sustainable and sustained economy is one of the European Union’s priorities and at the same time an objective that has become more complex due to the Covid-19 health crisis, in which we urgently need to strengthen the economy and regain stability in employment. For this reason, “Circular and save” was an opportunity and a space for information on EU guidelines at a time when pandemic and projects are within the framework of environmental issues.

The topic was addressed by the association Projuven through different activities both in an establishment located in the heart of the city and in different open public spaces. Some of the contents of “Circular and Save” were: the development of a circular business plan or canvas, a debate on the policy of birth control in developing countries, the organisation of a campaign to promote the circular economy and the proposal of product design strategies in line with this environmentally friendly framework. Despite the uncertainty and fear of the Covid-19, it should be noted that young Europeans are showing an interest in learning and increasingly carrying out projects and daily practices towards a circular economy. Projects such as “Circular and save” inspire young people to change and become much more aware of their role in the sustainable transition. This population continue to work on it as the Vice President of the European Youth Parliament of Water David Lindao who attended and actively participated in the meeting.

In addition to Cristina Tavío’s speech, other topics were presented by the Finnova Foundation’s participants such as the programme coordinated with the European Commission Startup Europe Awards (SEUA). The two young Finnova participants, Jessica Escobar and Natalia Cediel explained to the audience all the alternatives focused on innovation and especially in the field of environment. Some other participants expressed their interest in the culture of innovation that Finnova spreads. One of them, Sebastian Krzesniak from Poland, stated “for a couple of years I have had a project in mind related to health and I did not know that there were so many funding programmes and instruments to carry out it “.

Thanks to the German association of Copernicus, the Belgian Asul and the Spanish Projuven, young people have not only learnt about environmental issues through learning by doing activities, but they also have had the opportunity to celebrate their cultures and worked together to achieve the aims of the project. “Having these seminars and being surrounded by people from all over Europe, with such different cultures and perspectives has made me understand how difficult it is to work as a team in such a diverse environment” said Jessica Escobar from the Finnova Foundation. In short, “Circular and save” has been a rewarding experience and at the same time very similar to the model of working in diversity, the European Union model.

A highly transparent association founded in Berlin in 2000 that operates worldwide, but its priority is mainly Europe and extends from Lisbon to Vladivostok. It has a multicultural and creative team that brings together dedicated individuals with the same vision who strive to create a sustainable future. Copernicus is building a European network of ambitious people. One of its objectives is to eliminate social inequalities between the developed west and the developing east. Important tasks also include the generation and development of new ideas that contribute to a tolerant society, symmetrical democratisation and a long-term sustainable economy.

It is a non-profit organization that aims to: cooperate for the integration and knowledge of the different cultures present in the university, national and international reality, particularly in Latin American and Spanish-speaking countries; promote development and social, economic and cultural inclusion through academic cooperation; improve education and knowledge with other national and international associations and organizations that operate in the same field of development and cooperation; and promote peace processes through the organization of international conferences and seminars with political representatives from Europe and Latin America.

It is a Spanish non-profit organization founded in 2015. Its name means Youth Project (Proyecto Juvenil). For its team of professionals, being part of its projects means being a social entrepreneur and maintaining a passion for social purposes.