Finnova at FITUR 2022: sustainability, digitalization and training in European funds for tourism 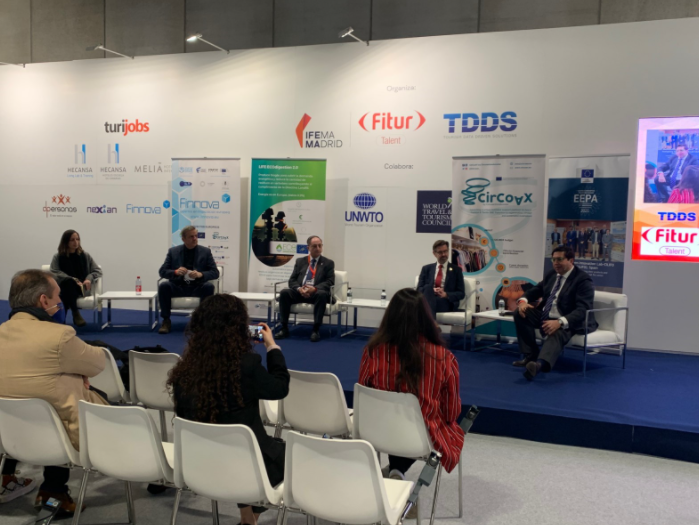 Once again, Finnova was present at FITUR, the International Tourism Fair, which was held from 19 to 23 January at IFEMA (Madrid Trade Fair Centre). After the hard blow of the pandemic to tourism, the foundation is committed to sustainability and digitalization as the cornerstones for the recovery of the sector through the Next Generation EU recovery funds.

FITUR TALENT, the importance of training in the tourism sector

The Finnova Foundation co-organized an event on European funds for training on Friday 21 January, as part of FITUR Talent, a monographic space that focuses on people, their talent, skills and professional training.

During the panel, the speakers discussed the importance of training in the tourism sector. Frank Babinger, Advisor, Vice-rectorate for Employability and Entrepreneurship at the Complutense University of Madrid, highlighted the importance of internationalization, such as internships outside Spain: “We must make an effort beyond the classroom,” he said. For his part, Manuel Vegas, President of the Spanish Association of Hotel Managers, pointed out the importance of training young people for the sustainable and environmentally conscious transformation of hotels.

Finally, Juanma Revuelta, CEO of Finnova and moderator of the event, presented two of the European projects in which the foundation participates as a partner. LIFE Ecodigestión, as a replicable model in the HORECA sector, and Circoax by CircularInnoBooster, where companies such as DeleiteWear participate, to recycle hotel sheets and towels, giving them life in the form of clothing.

Fitur was also the setting for the presentation of the Interreg NAPOCTEP project, a development alternative for rural areas based on the rich Napoleonic heritage of Castilla y León and the Central region of Portugal. The project, led by the Comunidade Intermunicipal da Região de Coimbra (CIM Regiâo de Coimbra), has created different tourist routes following the different scenarios of the War of Independence in Spain and Portugal, contributing through cultural tourism to boost the local economy, safeguard the environment and create employment in areas affected by depopulation. Íñigo Bilbao, coordinator of NAPOCTEP at the Finnova Foundation, was present in the space that the Junta de Castilla y León gave to the project in Hall 9, stand 9C10.

The foundation also collaborates with other European projects linked to the tourism sector such as Logroño Enópolis, the European Cultural Routes of the Council of Europe or the Interreg Atlantic MMIAH+.

FITUR is the premier annual event for global tourism professionals and the leading trade fair for inbound and outbound markets in Ibero-America. In the 2020 edition, FITUR broke participation records with 11,040 companies from 165 countries/regions, 150,011 professionals and 111,089 visitors from the general public. It is a unique place to promote brands, present new products, learn about the latest trends and fill agendas with contacts and prospects.

The NAPOCTEP project: Napoleonic Routes through Spain and Portugal is a project framed within the Interreg V-A Programme of Cross-border Cooperation Spain-Portugal POCTEP and whose aim is to enhance the cultural heritage of the Napoleonic period, through the creation of Napoleonic routes in an area that includes the central region of Portugal (Beiras and Serra da Estela) and the western provinces of Castile and Leon (Salamanca, Zamora, Valladolid, Leon and Avila), generating an innovative and attractive tourist product that generates economic activity and employment in an area affected by depopulation.

It is a European foundation based in Brussels whose objectives are to promote public-private cooperation through innovation to address social challenges such as employment, training, entrepreneurship, the UN SDGs, the circular economy, etc. Finnova organises the Startup Europe Awards, an initiative of the European Commission and the Finnova Foundation, to recognise the best European startups in the social field.