Fourth session of LATAM-UE Generation: “Entrepreneurship and Water: Engine of Economic Recovery and Social Development of Regions and Municipalities”

Fourth session of LATAM-UE Generation: “Entrepreneurship and Water: Engine of Economic Recovery and Social Development of Regions and Municipalities” 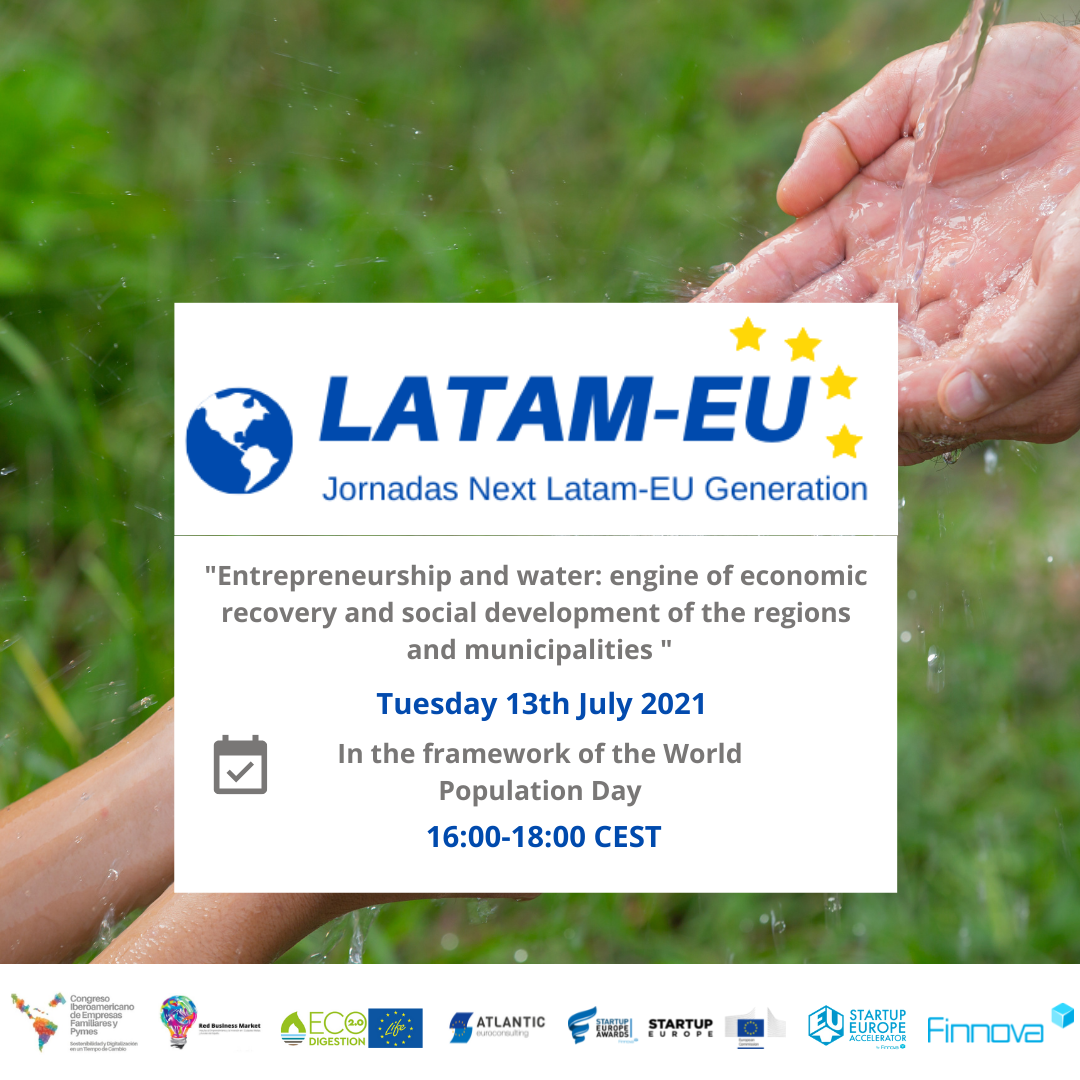 Banner of the 4th session of LATAM-EU

Brussels, 23.06.2021 – On July 13, 2021, on the occasion of World Population Day and World Oceans Day, Finnova Foundation and Startup Europe Awards will hold the fourth session of Next LATAM-EU Generation: “Entrepreneurship and Water: Engine of Economic Recovery and Social Development of Regions and Municipalities” together with Red Business Market and the Congreso Iberoamericano de Empresas Familiaries y Pymes.

Next LATAM-EU Generation seeks to exchange knowledge, to discuss available financial instruments for both continents and to launch common projects among different countries from Latin America and Europe aiming to create new business alliances. Each of the LATAM-EU sessions focuses on a World Day as part of its commitment to the UN SDGs.

The event on July 13 will be chaired by Juanma Revuelta, founder of Tourism Startup Europe Awards and CEO at Finnova, which has had more than 30 LIFE projects approved. According to Revuelta, “there are some €150,000M that can be redefined up until late 2023 and can be used up until 2030”.

The LIFE programme, established by the European Commission, will open for applications on late June until October 2021. It will have a financial envelope of €5,300M for projects addressing environmental issues.

Next LATAM-EU Generation was first launched after the success of the Congreso Iberoamericano de Empresas Familiares y Pymes, run by Red Business Market, and which was held on January 2021. It hosted 558 businesses, more than 60 domestic and international speakers and nearly 9,000 attendees (companies). This event showed that transatlantic collaboration is needed in order to face shared challenges in both continents, such as digitalization, sustainability and circularity after Covid-19.

Josu Gómez Barrutia, CEO at Red Business Market, claims that “there is no doubt whatsoever these events, which serve as a meeting point for developing strategic connections in entrepreneurship and business development and cooperation between the EU and Latin America are crucial in such a time of deep changes, challenges and transformations in economies, societies and geopolitics.

Haven’t registered yet? You can do it for free here.

The first LATAM-EU session was held on March 8 on the occasion of International Women’s Day. It was run by several female speakers, such as Patricia Llombart, EU Ambassador in Colombia, Liskel Álvarez, External Actions Senior Officer at Cabildo de Tenerife, and Adriana Vargas, head of Trading Links of the Colombian Mission in the EU. The goal of this event was to discuss the role of women in business cooperation between Latam and the EU, with a special focus on innovation and entrepreneurship.

The second session, which was held on April 6 (on the occasion of World Health Day), was named “Challenges and Opportunities for Tourism through Cooperation between Latam and the EU during Covid-19”. Its main topics were challenges that the tourism sector has to face and how to. This session was attended by Manuel Vegas, president of Asociación Española de Directores de Hotel (AEDH); Antonio López de Ávila, Co-founder and CEO of Toursim Data Driven Solutions (TDDS), and Irene Sánchez, Business Creation Manager at EIT Health Spain.

The third session, which was held on May 11 on Global Recycling Day, was named “Challenges of Circular Economy in LATAM-EU Cooperation as a Production and Consumption Model for Sustainability”. Speakers included Isabel Silva Souza, Ambassador of the European Commission’s Climate Pact; Álvaro Hernández, Chairman of the Board of Directors of Inboplast; Sharam Yalda, partner of CirCoAX and founder of HumanNation; Alonso Salguero, CEO at GTA Ingeniería y Medioambiente, and Giuseppe Liberati, Executive Director at Bridging Value.

Next LATAM-EU Generation is made up of nine online events which will take place every second Tuesday of each month. Each event is held on the occasion of an International Day in line with UN SDGs. To top it all off, if the health situation allows it, an on-site event will be held in Medellin (Colombia) to celebrate the final of LATAM Startup Europe Awards.

Finnova Foundation is a Belgian-Spanish foundation which helps institutions and organisations getting funds for innovative projects. Its objective is to promote private-public cooperation through innovation in order to address social challenges, e.g. employment, training, entrepreneurship, SDGs, circular economy, etc. Finnova is in charge of organizing the Startup Europe Awards, a joint initiative by Finnova and the European Commission to reward the best European start-ups.

Startup Europe Awards is an initiative by DG CONNECT and has been implemented by Finnova Foundation since 2016. Startup Europe Awards are an innovative mechanism aimed at identifying disruptive startups promoting private-public partnership. They also seek to raise awareness on the importance of self-entrepreneurship as a driving force for job creation. In addition to promoting networks to meet the UN SDGs and the European Green Deal objectives, they also contribute to circular economy, sustainable tourism and fighting against climate change.

Business Market is a forum connecting investors, businesses, entrepreneurs and start-ups from Ciudad Real aiming to create a network of business, financing and support for economic and business projects in that area. All this funding can be coupled with venture capital, business angels, personal investments and corporate or financial funds for innovative and disruptive initiatives with an added value which need funding to start operating.