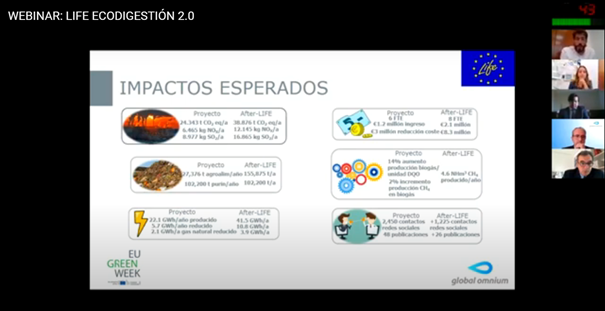 On the occasion of EU Green Week (#EUGreenWeek), Global Omnium and the Finnova Foundation have organised an off-site event that has been developed online. This initiative was carried out through a webinar that included four blocks: EU Challenges, Presentation of LIFE projects, The World Water Challenge and EU 2027 Funding Opportunities. In this way, LIFE ECOdigestion 2.0 presented an automatic control system for the dosage of organic waste in anaerobic digesters in WWTPs to maximise the production of biogas on demand as a renewable energy.

During the launch of the online conference “Presentation of the LIFE ECOdigestion 2.0 Project” some 170 people were reached. Specifically, more than 120 people on Facebook and more than 40 registered.

EU Green Week (#EUGREENWEEK) will be held from 19-22 October 2020. Among other issues, it will mainly deal with nature and biodiversity. It will focus on the contribution that biodiversity can make to society and the economy, and the role it can play in supporting and stimulating recovery in the world after the pandemic, creating jobs and sustainable development. The new strategy shows that recovery is an opportunity for a fresh start, knowing that transformational change is possible. Under this premise, the objective of the webinar was to frame the LIFE ECOdigestion 2.0 project in Green Week.

At present, the energy consumed in the European Union’s waste water treatment plants (WWTPs) is between 1% and 3% of the total energy produced in the Union, which is about 10,000 GWh/year, causing the emission of more than 27 million tonnes of CO2 into the atmosphere. Furthermore, this electricity demand is going to increase by approximately 20% in 15 years A need that was highlighted during the event by several speakers, such as Carlos Lafita, Research and Development Technician at Global Omnium, who stated that “One of the objectives of LIFE ECOdigestion2.0 is to offer a technology that can treat slurry in a cleaner way, allowing it to be used for energy production. In this way, we are able to reduce energy consumption and costs”.

Under these circumstances, it should be noted that energy production through co-management of waste in WWTPs has significant environmental advantages in terms of energy production, offering an attractive alternative to fossil fuels in the production of energy and heat. These advantages are in line with the commitments reached in the Paris Agreement in terms of reducing CO2 emissions. Furthermore, it allows waste to be transformed into raw materials, as recommended by Directive 2008/98/EC. The LIFE ECOdigestion 2.0 tool will allow the control of production on demand of biogas in digesters working on sludge with purification plant, agro-food waste and/or manure.

This was confirmed during the event by the speaker María José Tárrega, Process Manager at Global Omnium, who stated that “The need for biogas as an energy source is not always constant. We do not want to produce it and have to burn it. This is how LIFE ECOdigestion 2.0 was created for its dosage”.

On this basis, the main objective during the presentation of the project was to demonstrate the scaling up of the technology for the production of biogas on demand with sludge from WWTPs, using agri-food waste and slurry as a cosubstrate. The technology is based on that developed during the previous project, LIFE ECOdigestion, whose main aim was the development, implementation and demonstration at pilot scale of a technology for the automatic control of waste dosage in anaerobic digesters of WWTPs and, consequently, to maximise biogas production and waste treatment capacity.

Following the presentation of the LIFE ECOdigestion 2.0 project, several speakers from Global Omnium then went on to present another LIFE project, namely LIFE Renaturwat. Among them was María Peña, Wastewater Technician, who stated that “Among the advantages of LIFE Renaturwat are the elimination of organic matter and the elimination of suspended solids” or Nuria Oliver, R&D Technician, stating that “It is interesting to use sludge as it is considered non-hazardous waste. In addition, it contains a large amount of aluminium, which allows it to eliminate certain substances in a better way”.

During the event, the Sustainable Development Goals (SDA) were a key point in the action strategy presented by the LIFE ECOdigestion 2.0 initiative, since during the implementation of its proposal it would comply with several of these goals, such as “Guarantee the availability and sustainable management of water and sanitation for all”, “Ensure access to affordable, reliable, sustainable and modern energy for all” or “Develop resilient infrastructures, promote inclusive and sustainable industrialisation, and encourage innovation”, among others.

With this intention, during the event the speakers presented and discussed the current problems affecting the energy sector, as well as the reuse of waste water, as well as providing possible solutions for the future of the European Union and, ultimately, the world. Among the participants were personalities such as Vicente Bosch Puchades, CEO of Inired, who declared “Thanks to Global Omnium, with its attitude of integrating local companies, it gives the opportunity to create initiatives that improve the technological ecosystem” or Juan Viesca, Director of European Funds at the Finnova Foundation, who in relation to the new opportunities for EU funds for 2027 stressed “The time to work is now, don’t wait for the calls. We must act with clear ideas”.

In this way, and with a budget of more than 970,000 euros, the LIFE ECOdigestion 2.0 project promises to make the use of biogas a reliable energy source to cover industrial energy demand as green energy within the framework of the EU’s objectives of achieving 20% of energy from renewable sources by 2020 and at least 27% by 2030. Based on this background, the initiative will last almost four years, specifically from 01/09/2020 to 29/02/2024, with Global Omnium Medioambiente as the main coordinator and Fundación Finnova and Águas do Centro Litoral as partners.

If you did not have the opportunity to access the event, you can see it at this  link https://www.youtube.com/watch?v=5766gy4V1Fc

European Foundation for the Financing of Innovation. It is a European foundation based in Brussels whose objectives are to promote public-private cooperation through innovation to address social challenges such as employment, training, entrepreneurship, UN ODS, the circular economy, etc.Finnova organises the EuropeAwards Startups, an initiative of the European Commission and the Finnova Foundation, to recognise the best European startups in the social field. http://finnova.eu/

The company that gives rise to Global Omnium, Aguas de Valencia, began its journey in 1890. It is an entity specialised in the integral management of water. It currently covers 5.5 million people in more than 300 Spanish cities, as well as having a presence in another 3 continents. It is a project of social commitment, made up of century-old companies that have been contributing to the growth of the cities and municipalities in which they work for more than a century. https://www.globalomnium.com/Grupo/Inicio/