Global Omnium and the Finnova Foundation present the LIFE ECOdigestion 2.0 project in the framework of the #EUGreenWeek 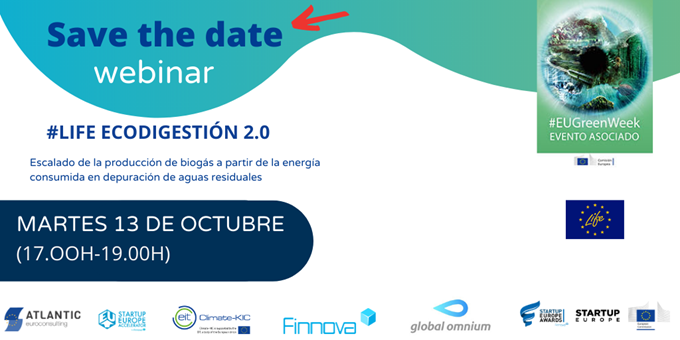 On the EU Green Week (#EUGreenWeek), Global Omnium and the Finnova Foundation will organise an off-site event on 13 October from 17:00 to 19:00. This initiative will be carried out virtually through a webinar that will include four blocks: EU Challenges, Presentation of LIFE projects, The World Water Challenge and EU 2027 Funding Opportunities. In this way, LIFE ECOdigestion 2.0 will present an automatic control system for the dosage of organic waste in anaerobic digesters in WWTPs to maximise the production of biogas as a renewable energy.

The EU Green Week (#EUGREENWEEK) will be held from 19-22 October 2020. Among other issues, it will mainly deal with nature and biodiversity. It will focus on the contribution that biodiversity can make to society and the economy, and the role it can play in supporting and stimulating recovery in the world after the pandemic, creating jobs and sustainable development. The new strategy shows that recovery is an opportunity for a fresh start, knowing that transformational change is possible. Under this premise, it was decided to frame the LIFE ECOdigestion 2.0 project during the Green Week.

Currently, the energy consumed in the European Union’s waste water treatment plants (WWTPs) is between 1% and 3% of the total energy produced in the Union, which is about 10,000 GWh/year, causing the emission of more than 27 million tonnes of CO2 into the atmosphere. Furthermore, this electricity demand is going to increase by approximately 20% in 15 years. In this context, and in view of the need to reduce greenhouse gas emissions through the production of renewable energy, the energy recovery from wastewater is essential, as the energy it contains is estimated at some 2.7kWh/m3.

Under these circumstances, it should be stressed that energy production through co-management of waste in WWTPs has significant environmental advantages in terms of energy production, offering an attractive alternative to fossil fuels in the production of energy and heat. These advantages are in line with the commitments reached in the Paris Agreement in terms of reducing CO2 emissions. Moreover, it allows waste to be transformed into raw materials, as recommended by Directive 2008/98/EC. Thus, the LIFE ECOdigestion 2.0 tool will allow the control of production on demand of biogas in digesters working on sludge with purification plant, agro-food waste and/or manure.

The main goal of this project is the scaling up of the technology to produce biogas on demand with EDAR sludge, using agro-food waste and slurry as a co-substrate. The technology is based on that one developed during the previous project, LIFE ECOdigestion, whose main aim was the development, implementation and demonstration on a pilot scale of a technology for the automatic control of waste dosage in anaerobic digesters of WWTPs and, consequently, maximising biogas production and waste treatment capacity.

The Sustainable Development Goals (SDGs) are also a key point in the strategy of action followed by the LIFE ECOdigestion 2.0 initiative. During the implementation of its proposal, it would comply with several of these objectives, such as “Guaranteeing the availability and sustainable management of water and sanitation for all”; “Ensuring access to affordable, reliable, sustainable and modern energy for all” or “Developing resilient infrastructures, promoting inclusive and sustainable industrialization and encouraging innovation”; among others.

Because of this, during the event scheduled for 13 October, the speakers will present and debate the current problems affecting the energy sector, as well as the reuse of wastewater. In addition, it will provide possible solutions for the future of the European Union and, ultimately, the world. Among the participants, there will be personalities such as Vicente Bosch Puchades, CEO of Inired, or Juan Viesca, Director of European Funds at the Finnova Foundation.

With a budget of more than 970,000 euros, the LIFE ECOdigestion 2.0 project promises to make the use of biogas a reliable energy source to cover industrial energy demand as green energy within the framework of the EU’s objectives. Therefore, it will achieve 20% of energy from renewable sources by 2020 and at least 27% by 2030. Based on this, the initiative will last almost four years, specifically from 01/09/2020 to 29/02/2024, with Global Omnium Medioambiente as the main coordinator, the Finnova Foundation and Águas do Centro Litoral as partners.

European Foundation for the Financing of Innovation. It is a European foundation based in Brussels whose objectives are to promote public-private cooperation through innovation to address social challenges such as employment, training, entrepreneurship, the UN ODS, the circular economy, etc. Finnova organises the EuropeAwards Startups, an initiative of the European Commission and the Finnova Foundation, to recognise the best European startups in the field

The company that gives rise to Global Omnium, Aguas de Valencia, began its journey in 1890. It is an entity specialised in the integral management of water. It currently covers 5.5 million people in more than 300 Spanish cities, as well as having a presence in other foreign countries. It is a project of social commitment, made up of century-old companies that have been contributing to the growth of the cities and municipalities in which they work for more than a century.