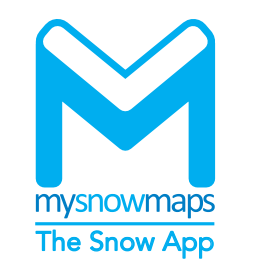 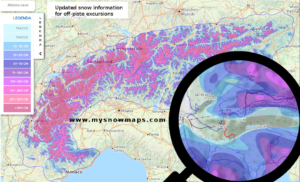 The Motivation:
Since I was a child, I have always been fascinated by the snow. Seeing the snow falling was for me the most beautiful form of magic. I was curious on “how much snow there was everywhere”, especially when I saw the white mountains above me, but that information was often lacking or ambiguous. Later, my studies on snow modelling and my commitment to answer this question gave birth to Mysnowmaps.

Thanks to a combination of mathematical modelling with ground and satellite data, we can assess with accuracy the snow distribution at continental scale, as snow is the primary source of water in the mountains. Knowing with accuracy the snow distribution allows us to predict water resources for multiple beneficiaries, like:
1- Public administrations: we improve the monitoring of snow distribution, passing from a classical point-measurement to a distributed mapping, thus allowing a better decision making for civil protection.
2- Hydro-power: we improve the accuracy of water inflow prediction, thus allowing a better energy trading.
3- Tourism: we improve the planning of excursions for off-piste explorers by providing an interactive browsable map of snow presence.

Where are we now?

Based on the same technology, we have created customized products for each business sector (public administration, hydro-power and tourism). As far as technology is concerned, we are currently in a validation phase, where selected customers are testing the service in an operational way. As far as business is concerned, we are developing our marketing tools to attack the market in each business sector. Now, snow maps are operative on the Alps (176.000Km²) and we are confident to be ready to scale the system worldwide in the next 3-5 years. 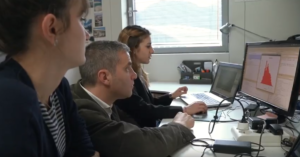 What does Europe represent for the company?

Although Europe is formed by several countries where multiple languages are spoken, I think us, European people share the same cultural background. In fact, culture is not just a language or history or religion. It is also scientific development and entrepreneurship. Europe gave birth to many of the scientists and explorers of the last millennium. So, this is what Europe is for me: the land where great discoveries may take place and incredible heritage of great men that dared their destiny to envision new achievements. Like Columbus who sailed from Europe to the new world, I also feel like a sailor going to the new era of digital transformation with my company.

This recognition means much to me. It is a great honour to be among the most innovative start-upper in Europe and to represent my country in such a prestigious competition.