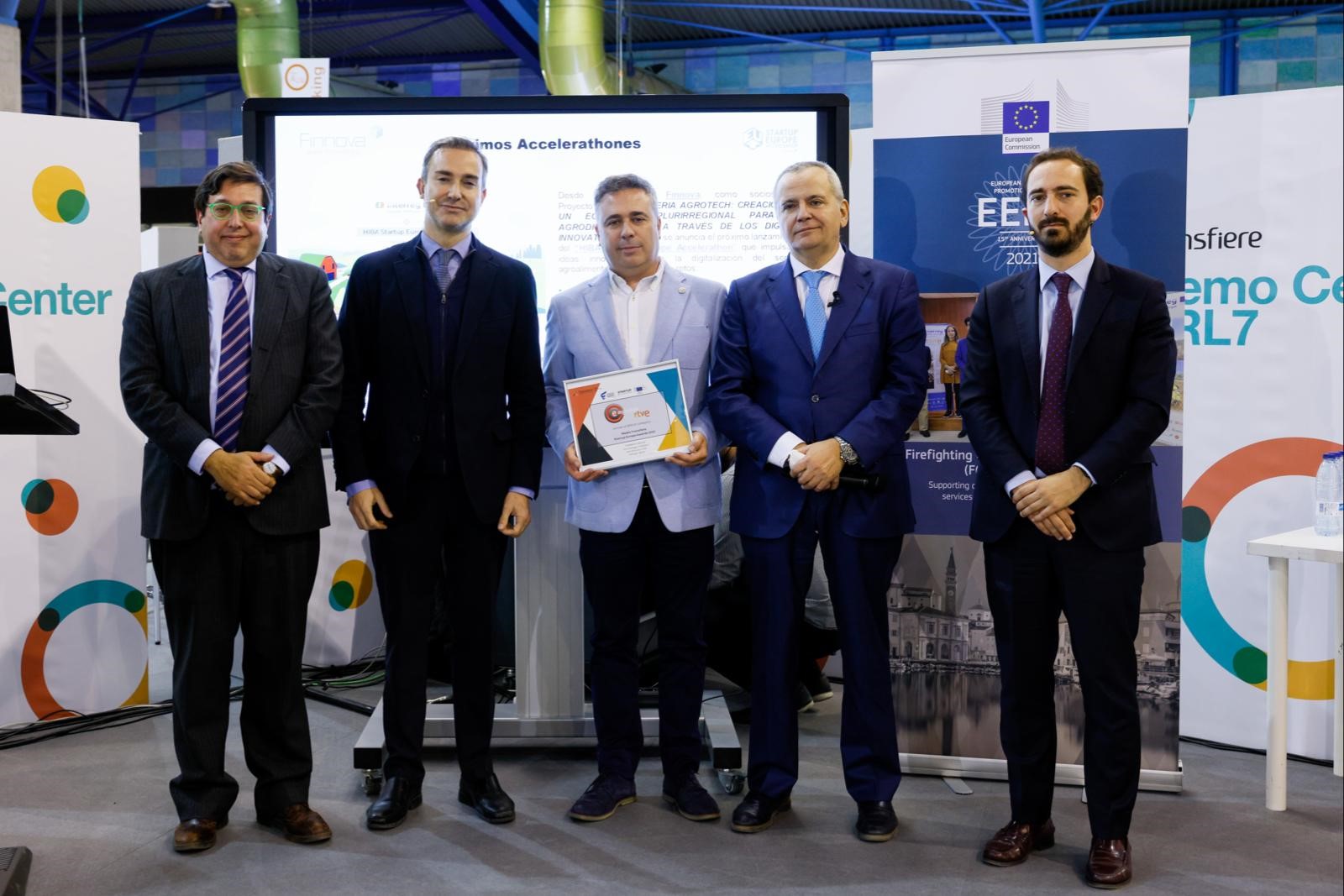 Amós García Hueso, Secretary General of the Agricultural and Fisheries Management Agency of Andalusia, and Jordi Llinares, Deputy Director General for the Digitalization of Industry and Collaborative Environments and head of the Digital Innovation Hubs at the Ministry of Industry, Trade and Tourism handed over the award.

The event was held on Wednesday, February 16 at 18.50 in the OPEN INNOVATION AREA DEMO CENTRE of the FYCMA exhibition centre

Málaga, February 17, 2022– The programme Emprende TVE broadcast by Canal 24 horas received on Wednesday, February 16, the Media Transfiere Startup Europe Awards 2022 at the European Forum for Science, Technology and Innovation. Programme director Juanma Romero and producer Luis Olivan received the European award from Amós García Hueso, Secretary General of the Agricultural and Fisheries Management Agency of Andalusia, and Jordi Llinares, Deputy Director General for the Digitalization of Industry and Collaborative Environments and head of the Digital Innovation Hubs at the Ministry of Industry, Trade and Tourism.

The Media Transfiere Startup Europe Award, which is awarded in the framework of Startup Europe of the European Commission’s DG Connect, recognizes those media that, over time, have been characterized by their support for entrepreneurship and dissemination of technology transfer and practical opportunities of the European Union for entrepreneurs. Emprende TVE has been broadcasting EU content on Canal 24 Horas every week since 2013, and this year it is being recognized for its dissemination, educational and informative work in support of entrepreneurship and scientific and technological transfer. This recognition goes to TVE and the Emprende TVE team led by Juanma Romero, director of the programme and Luis Oliván, as EmprendeTVE producer, to highlight their work, creativity with content, as well as the effort to go to small municipalities in empty Spain to publicize rural entrepreneurship and cultural tourism.

Juanma Romero and Luis Olivan from EmprendeTVE collected the award from Amós García Hueso, Secretary General of the Andalusian Agricultural and Fisheries Management Agency, in recognition of the television programme’s support for technology transfer in the primary sector and digitalization.  For his part, Jordi Llinares, representing the Ministry of Industry, Trade and Tourism, highlighted EmprendeTVE’s contribution to innovation and access to recovery funds for Next Generation and España puede.

Transfiere is an important European forum for science, technology and innovation, held annually in the Andalusian city of Malaga.

It is an event of great national and international relevance that will be held on Wednesday 16 and Thursday 17 February at the Palacio de Ferias y Congresos de Málaga, bringing together professionals, entrepreneurs, scientists, academics and authorities related to innovation. This forum aims to encourage debate on scientific and technological issues, while promoting synergies, relationships, alliances or ventures that will be necessary for the development of projects and the promotion of Spain as an innovative country.

Finnova is a Spanish-Belgian non-profit foundation based in Brussels (Belgium) with a presence in Spain in the Valencian Community, the Basque Country, Andalusia, the Community of Madrid and the Canary Islands. Finnova’s mission is to assist in the creation of innovative initiatives through appropriate funding and support. Finnova facilitates communication and information between different public and private entities with the aim of supporting and promoting EU funding streams in the thematic areas of environment, water, health, public works, energy, tourism, ICT and entrepreneurship.

Finnova’s experience in leading European project communication and dissemination activities is combined with a solid proven track record in start-ups and business support programmes, such as accelerators, incubators and ceremonial event selection and awarding. The Foundation has participated and/or mentored 27 projects with the Seal of Excellence, a quality label awarded to project proposals that have applied for funding from HORIZONTE2020, the EU’s Framework Programme for Research and Innovation.

In 2021 Finnova received the European Enterprise Promotion Award (EEPA) from the European Commission in category 4 of support for the internationalization of companies. In its commitment to innovation, Finnova has been organizing the Startup Europe Awards since 2016, an initiative of the European Commission’s DG Connect, to recognize the best European startups in the social field.