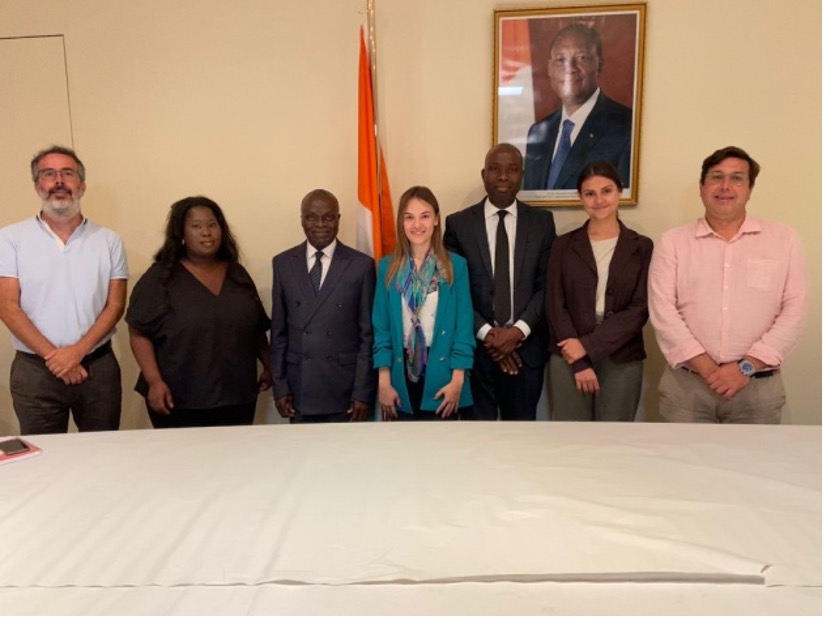 The search of alliances for the ongoing project and the third call in 2023 were the objectives of these visits made in commemoration of Africa’s Women’s Day.

Brussels, 08.08.2022. Fuerteventura’s Government Representative and AFRIMAC 2 Project Coordinator, Carlos D. Gutiérrez, paid a visit to the European capital in order to scout potential alliances in upcoming activities and calls. This is a project 85% co-financed by the European Union through the Interreg MAC program (Madeira – Açores – Canarias) that aims to enhance the internationalization of companies within the frame of cooperation between the Canary Islands and Western Africa, relying on exchanges and knowledge generation with a gender approach. By the agency of the Finnova Foundation team in Brussels and its General Director, Juanma Revuelta, synergies have been built with the Ivory Coast Embassy and two organizations committed to female entrepreneurship.

The AFRIMAC 2 project puts the focus on activities aimed at female entrepreneurship in the Canary Islands, Cape Verde and Senegal, adding up a great interest to the collaboration with organizations committed to this cause. On the one hand, training and support for women has been the focus of discussions with Emilie Lubukay, head of Women Entrepreneur Excellence. On the other hand, the spaces that offer the necessary tools to empower women have been the reasons to meet with Bouchra Al Mehraj, entrepreneur and founder of the non-profit organization The Urban Women. Both entities have valued the importance of these projects and have stated their interest in taking part in the initiatives of AFRIMAC 2 and other future calls.

Meetings with the various associations in Brussels have served to motivate by sharing experiences, messages on female entrepreneurship and knowledge covering this year’s second semester initiatives. The representatives of AFRIMAC 2, in collaboration with the Finnova Foundation, will launch the European contest Fuerteventura Women Startup Europe Awards within the framework of the Starup Europe Awards initiative implemented by the Finnova Foundation and promoted by the DG CONNECT of the European Commission.

Likewise, next October will be welcoming the 100 women to change West Africa event, to be held in a hybrid format in Fuerteventura in order to celebrate the semifinal of this European competition. The objective will be to promote the participation of women from the Canary Islands, Senegal and Cape Verde, giving acknowledgment and visibility to their ideas and projects. To close with a final flourish, the final ceremony of these awards will take place virtually in November within the framework of the Women Impact Summit, one of the largest international gatherings for women.

To ensure the continuity of AFRIMAC, knowledge and plans have been shared with the diplomatic corps from the Ivory Coast Embassy in Brussels. It is important to highlight that this is one of the four countries that will benefit from the European funding program for next year’s call.

Officials Mr. Aka Ane, Chief of the Embassy of Ivory Coast’s Consular Section and Mr. Adingra Yao Kouman, First Secretary and Ivory Coast Embassy’s European Institutions Officer have expressed their interest and introduced some of the areas that this future edition should revolve around, in order to leave the best possible mark. Following this premise, the General Manager of the Finnova Foundation, Juanma Revuelta, also introduced the projects, funding lines, training programs and Finnova’s experience available to diplomats.

About the Finnova Foundation:

Finnova is the European foundation for the funding of innovation. Objectives include the promotion of public-private cooperation through the application of the best available low-budget technological solutions. It aims to address social challenges such as employment, entrepreneurship, the United Nations SDGs, circular economy, waste recovery, sustainable tourism and the fight against climate change. The Finnova Foundation promotes green employment, economic reactivation, training and youth employment.

AFRIMAC 2 is a program for business, technological, entrepreneurial and innovative exchange regarding major economic impact matters between the Canary Islands and West Africa. The main objective embodies the enhancement of internationalization for companies in cooperative space, through the creation of networking and the generation of a knowledge environment with a gender approach.

It represents a bilateral mission in Brussels and promotes the interests of Côte d’Ivoire in Belgium. The Embassy also plays an important role in development, cultural issues and in press relations.

The consulting and strategy firm that supports entrepreneurs and companies through the development of their business.

About The Urban Women

The Urban Woman is a unique space that welcomes all people, regardless of race, religion, nationality, disability, sex, gender identity, sexual orientation, or age. The Urban Woman is the first women’s center dedicated to giving you the tools and guidance to become the woman you’d really like to be.