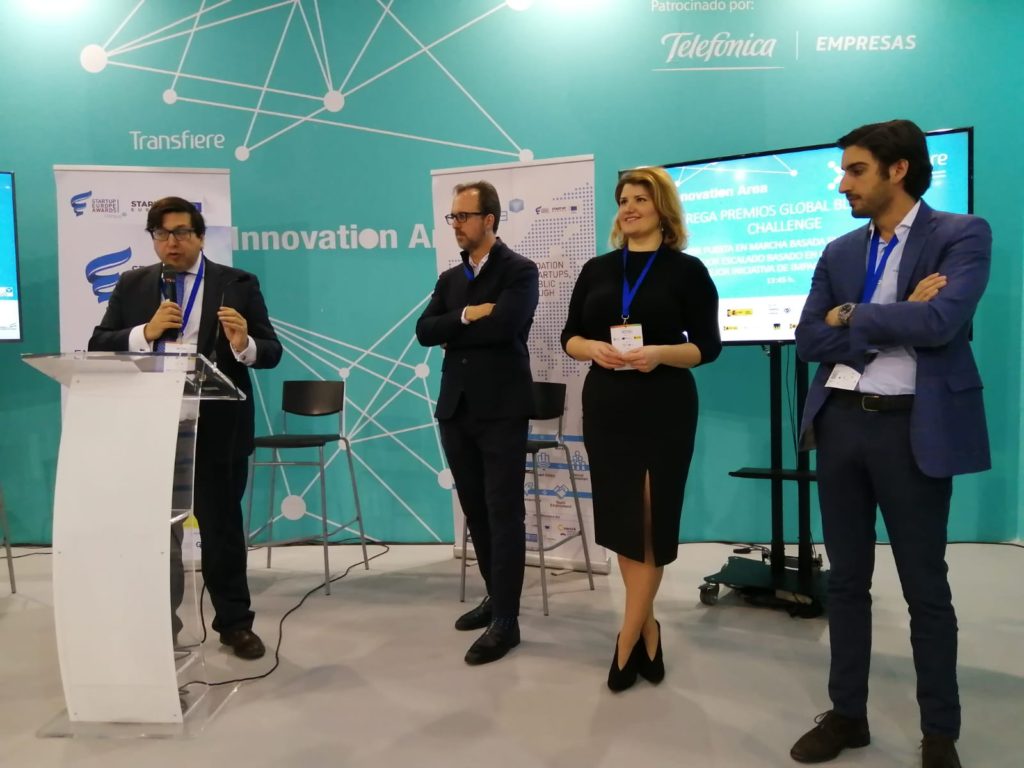 Málaga, 13 February 2020 – Representatives of the three winning teams of the Global Blockchain Challenge met again in Malaga, within the framework of the 9th Transfer Forum, to start the acceleration program they received from the Finnova Foundation after participating and taking first place in each category of the blockchain challenge held in the city of Malaga last November.

The Global Blockchain Challenge, held as part of the Convergence congress activities agenda, brought together 22 participating teams and over 200 enthusiasts in an open innovation exercise that resulted in blockchain-based solutions to help achieve the 17 Sustainable Development Goals (SDAs) promoted by the United Nations. This initiative was co-organised by Alastria, DG CONNECT/European Commission, the EU Blockchain Observatory and Forum, INATBA and the Finnova Foundation, the entity responsible for the Startup Europe Awards.

The award ceremony was attended by Claudia Condulet, representing the Bellejo startup that won the award for best blockchain-based startup; Vicente Ortiz, from Woonkly Social, recognized as the best social impact initiative, and Alejandro Gómez de la Cruz, representing Cofounding, the startup that won the best blockchain-based scale. Juan Manuel Revuelta, Director General of the Finnova Foundation; Rudy Aernoudt, Senior Economist of DG GROW/European Commission and Montse Guardia, Director General of Alastria were in charge of delivering the awards to the winners and initiating the acceleration program that will be designed for each of the solutions to be implemented in the short term.

The startup Bellejo presented the creation of a new environmentally friendly sunscreen product with Lignin from a by-product of beer, connected with NGOs involved in the preservation of the marine ecosystem using blockchain.  While the startup Cofounding presented a solution within the ODS 9 focused on the development of a digital platform that allows citizens to report incidents on public infrastructure, in exchange for which they will receive rewards through an incentive system proposed with tokens.

For its part, the Woonkly Social team proposed a digital platform aimed at improving vaccination rates in underdeveloped countries through a system of rewards for doctors and patients that, in turn, allows for improved security and transparency of records. A project of these characteristics implies the participation of different actors, which is why its proposal was framed in ODS 17.

–Startup Europe is an initiative promoted by the European Commission and forms part of the various activities and initiatives corresponding to the “Digital Single Market” strategy launched in 2015. Its main objective is to facilitate job creation and business development in the digital economy both in Europe and internationally. Specifically, the Startup Europe initiative aims to connect people and companies or startups with investors, entrepreneurs, corporate networks, universities through various European networks. In addition, to support national initiatives that connect spaces where business projects and startups can be known, such as the Startup Europe Week or the Startup Europe Regions Network. And finally, to help different startups to expand their business in other markets such as Silicon Valley, India, Africa or the United Arab Emirates.

–Startup Europe Awards is an initiative promoted by the European Commission supported by the Committee of the Regions and the European Parliament and implemented by the Finnova Foundation, in collaboration with StartUp Europe. It is an open innovation tool that allows companies to identify new talented StartUps capable of solving current challenges in multiple areas.