The second day of the Womanation Congress was attended by more than 50 leading women, including the presence of the European Commissioner for Digital Economy and Society Mariya Gabriel 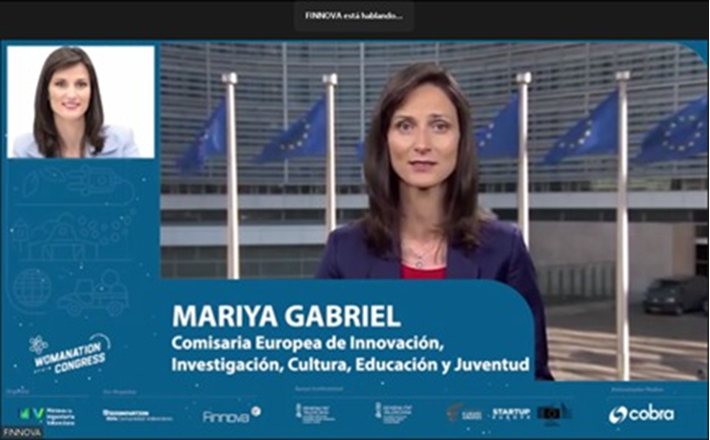 Paris, 12 February – The second day of the Womanation Congress, entitled “Women’s Congress for the whole Society”, opened with the intervention of the European Commissioner for Innovation, Research, Culture, Education and Youth, Mariya Gabriel, who emphasised “the need to support women’s initiative in entrepreneurship and innovation and the need to promote digital skills and STEM education in girls and women”.

The Womanation Congress organised by the Mesa de Ingeniería Valenciana (MIV) is co-organised by Technovation Girls and the Finnova Foundation. This meeting was also supported by the Startup Europe Awards (SEUA), the Iberian Blockchain Institute and the Business Market network, among others.

Thanks to the impulse of Regina Monsalve, president of COITVC, Angélica Gómez, Dean of COGITI Valencia, Maria José CEO of Talent Growth Management and many other women, the event has been a success.

The Womanation Congress, the first all-female digital congress, ended up with more than 350 registered participants on the 12th and with a reach of more than 2000 girls on the 11th. In total, there were more than 70 presentations on STEM (Science, Technology, Engineering and Mathematics) topics. Sandra Gómez, Deputy Mayor of Valencia City Council, emphasised the need to “make women visible in STEM areas and to transmit, from a very early age, technology and science in order to fight against the gender gap and the digital divide”.

The virtual event counted with the participation of different influential women, including Commissioner Mariya Gabriel, MEP Susana Solís, member of the Special Committee on Artificial Intelligence in the Digital Age, Isabel Benjumea, Vice-Chair of the Committee on Regional Policy in the European Parliament and Natalia Martínez Páramo, Deputy Head of Unit of DG Internal Market, Industry, Entrepreneurship and SMEs, who spoke about the COSME programme, the WEgate and the EEN network. 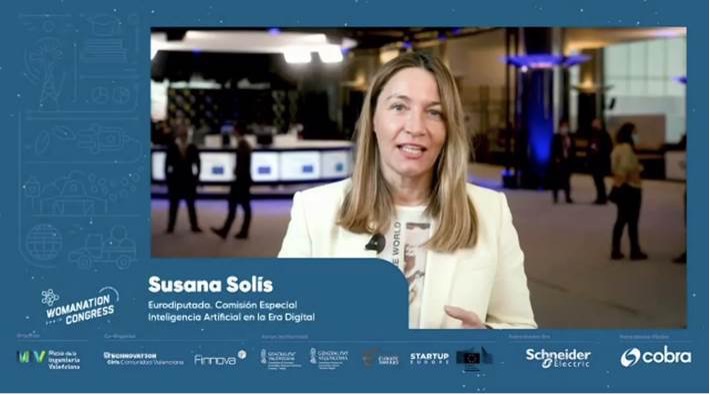 Susana Solís stressed the importance of education to increase the visibility of women in STEM fields and pointed out that “we need more female references in textbooks”. She also insisted on “the importance of improving things in the workplace, with policies that reconcile work and personal life”. For her part, Isabel Benjumea declared that “all those women who are now thinking of taking the risk and becoming entrepreneurs, what they have to feel is that in Europe it can be done, in Europe, today, it is possible“.

While the first day focused on girls and the younger population and its main objective was to revalue the role of women in scientific and technological professions through the presentation of innovative projects, recreational and educational activities and different innovative challenges were launched for girls to join them, for example, The Finnova Foundation prepared ten different challenges related to innovative fields such as cultural and sustainable tourism or circular economy. The second day was more focused on making female talent visible, for which, as Mariya Gabriel pointed out during her speech, “we have all the support and commitment from Europe“. To this end, there are multiple programmes, grants and aid, such as the PICE programme, the Robert Schuman grant or the platform for finding training placements in Europe, Next Talent Generation, among many others.

Today’s event was organised into five round tables divided into themes in which each participant was able to present their personal vision and the way in which they have taken part in this female technological, scientific and digital revolution, presenting the different projects and measures they have adopted. Yolanda de Aguilar, FYCMA’s general director, underlined the importance of collaborative systems and pointed out that “At FYCMA, we assume our strategic role in the reactivation, which is why we have re-armed ourselves digitally and technologically to continue boosting business activity and the convergence of innovation, knowledge and talent”.

Topics such as climate change, cultural and digital transformation, the importance of local and global sustainability, the circular economy, education, the impact of responsible business conduct and the importance of science and research  were discussed, and dozens of cutting-edge projects were presented. Lola Bordás, president of Fundadoras.CHALLENGES Next Digital Generation ODS-EU: Interreg Cilifo, indicated during her speech that “digitalisation for traditional sectors is a turning point to achieve scalable results”.

Pilar Ezpeleta, Director General of the Valencian Ministry of Universities, pointed out four risks that we cannot lose sight of: “the technological, digital, gender, educational, cultural and economic divide”. “If our girls and teenagers believe in themselves they will have a high level of well-being, we will have women prepared to face whatever comes their way”, said Petra María Pérez, emeritus professor in Anthropology Theory at the UV, who also believes that education is essential in the social, cultural and digital revolution we are witnessing. Anaïs P. Figueras, Director of Communication at Google Spain & Portugal, added that “we must approach technology as we approached English a few years ago”.

Juliana Herrero, chemical engineer and expert in Renewable Energy, director of Waste2Energy and Maria José Tárrega, Head of process at Global Omnium, LIFE ECOdigestion 2.0, presented their projects and emphasised the need to rethink the energy transition and “see which path we are going to take to meet the objective of climate neutrality in 2050”. Ainhoa Raso, Vice President of Innovation and New Developments in Tourism, presented the HiCard (Health Identification Card), a card with our medical data (vaccinations, allergies, treatments…) fully encrypted and secure on our mobile phone thanks to a Blockchain network. “Now, in times of Covid, we have dedicated a section where you can upload PCR results or if you are vaccinated,” said Raso.

The Womanation Congress, which is based on data such as the fact that, in Spain, only 17% of entrepreneurs are women, that 85% of women are not part of any Sillicon Valley startup or that 59% of Spanish startups do not have any women among their founding members or co-founders, encourages women to recycle themselves in these times of health crisis and to grow professionally since, “it is from courage that opportunities are best generated”, as Ezpeleta pointed out. Elena Contioso-Fleming, CLC manager at EIT Digital Spain, stated that “Spain is lagging behind other European countries in everything related to digitalisation, which is why EIT Digital provides co-funding for projects, supports scale-ups and opens the way for entrepreneurs in Spain to cross the Spanish border and reach other European countries”.

The composition of the roundtables has always followed the same pattern: a manager from a leading company, an independent expert, a talented young woman and a woman with responsibility within the public administration, moderated by a media manager, including, for example, Marta García Aller, a science and technology journalist from El Confidencial, who moderated roundtable 4. 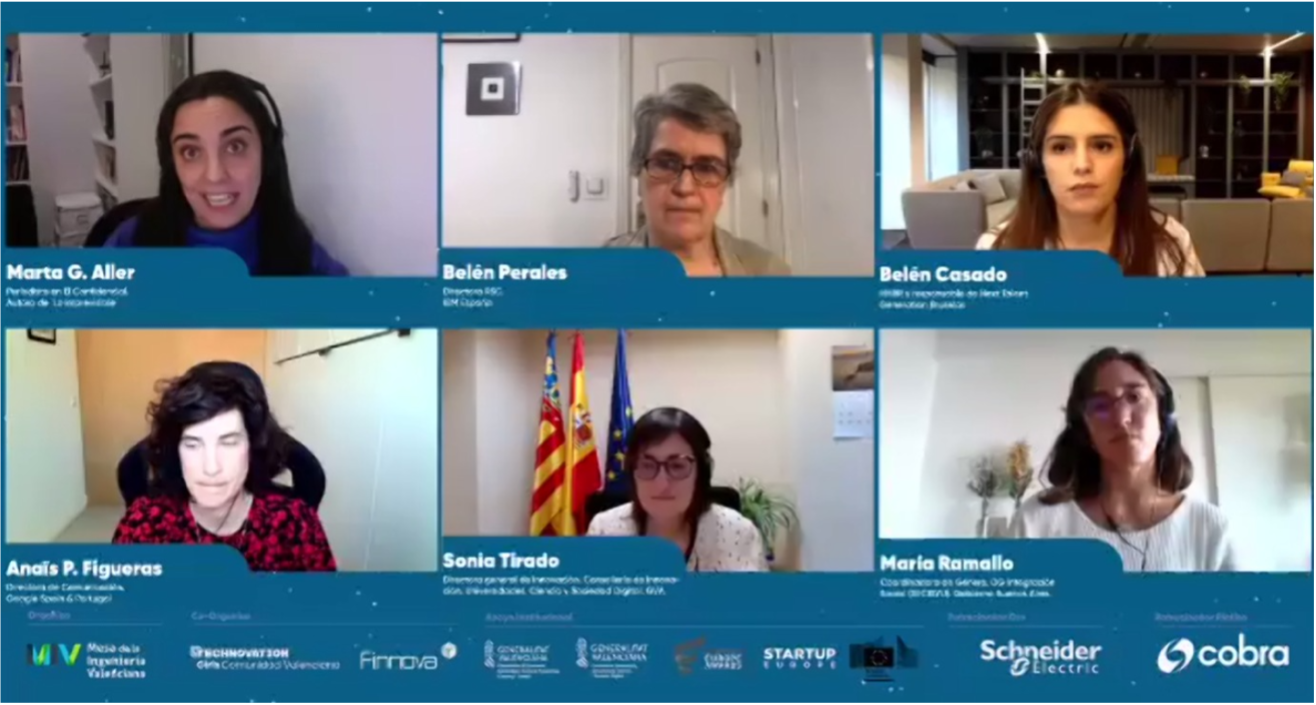 Some of the tables have had a section called “One to One“, a series of short interviews from one influential woman to another, thanks to which we have been able to listen to personalities such as María Tato, Director of women’s football of the RFEF, in conversation with Marina Gassent, General Director of Valencia CF Femenino, who defended the role of women in the world of football, and Leticia Chen, president of the Chamber for Spanish-Chinese Cooperation, who together with Carmen Sanz, president of the Spanish-Norwegian Chamber of Commerce, spoke about the collaboration projects in R+D+i between Europe and China for 2021.

At each table, a different challenge was launched in accordance with the Sustainable Development Goals (SDGs) of the United Nations 2030 Programme, from which each participant was able to develop their presentation. Mercedes Iborra, Co-founder of Visual Nacert, said: “It is not only about developing companies, but also about having a positive impact on society”, referring to the need to take care of the environment. Yolanda de Aguilar: “I strongly believe in collaborative systems. My work has always been in the world of trade fairs and congresses, such as IFEMA, where I was in charge of FITUR, and this led me to see that without public-private collaboration there is no way”. 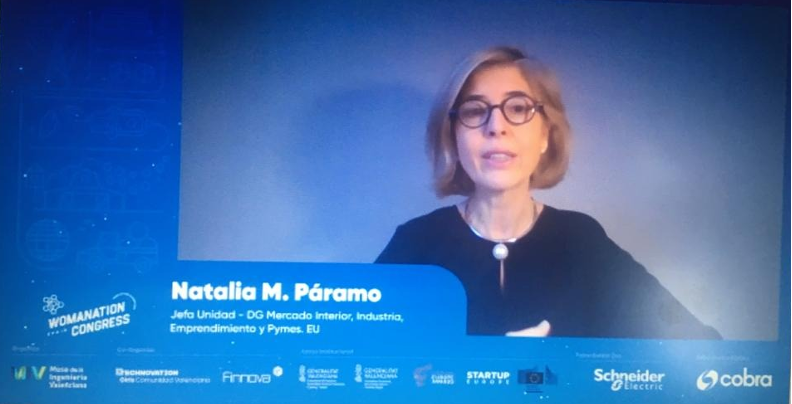 Thanks to the institutional and business support received, the hashtag #WomanationCongress has become a trendy topic in 11 countries and in almost 50 cities around the world, which is a clear sign of the international reach of the Womanation congress, which has also featured speakers from Panama and Argentina, such as María Ramallo, Gender Coordinator at the General Directorate of Social Integration (SECISYU) in the Government of the City of Buenos Aires (Argentina) and Malú Ramos, environmental engineer at Finnova, from Panama, who, despite the time difference, did not want to miss this multitudinous event.

Ramallo stressed the importance of “generating synergy, networks, alliances and, above all, collaboratively thinking about triple impact production and business models with a focus on women and people in vulnerable situations, is one of the ways in which we can promote their autonomy. In many cases, self-entrepreneurship is precisely the engine that generates employment”, a thought shared by many of our guests, such as Yolanda de Aguilar, who pointed out during her speech that “only through collaboration we can progress, together with innovation and technology”. Natalia Mártinez Páramo ended her speech by stressing that “support for women entrepreneurs must have special features to address the obstacles faced specifically by women”.

Womanation Congress’, a new national digital congress with a woman’s voice aimed at the whole of society, arrives on 11 February to inspire new generations and motivate current ones with “real talent”, current references and attractive projects.

Technovation Girls, promoted by Talent Growth Management in the Valencian Community, is the largest technology entrepreneurship programme/contest for girls worldwide launched by the American non-profit association Technovation. The programme challenges young people between the ages of 10 and 18 to create a mobile application (APP) that solves a social problem in their community, carry out a market study, marketing plan, business plan and present it to the jury.

It is a methodology of the DG CONNECT of the European Commission, implemented by the Finnova Foundation since 2016. The SEUAs are an open innovation tool to identify disruptive startups, promoting public-private collaboration and raising awareness of the importance of self-entrepreneurship as a driver of employment. In addition to generating alliances that help to meet the SDGs of the United Nations and the actions of the European Green Pact, thus contributing to the circular economy, the fight against climate change and sustainable tourism.

European foundation for the financing of innovation based in Brussels. Its objectives are to promote public-private cooperation through innovation to address societal challenges such as employment, training, entrepreneurship, the UN SDGs, the circular economy, etc. Finnova organises the Startup Europe Awards, in collaboration with the European Commission, to recognise the best European startups in the social field.