The European recovery fund Next Generation EU, with a total of 1.8 billion euros, was the focus of most of the conferences and workshops during the first day of Transfiere. 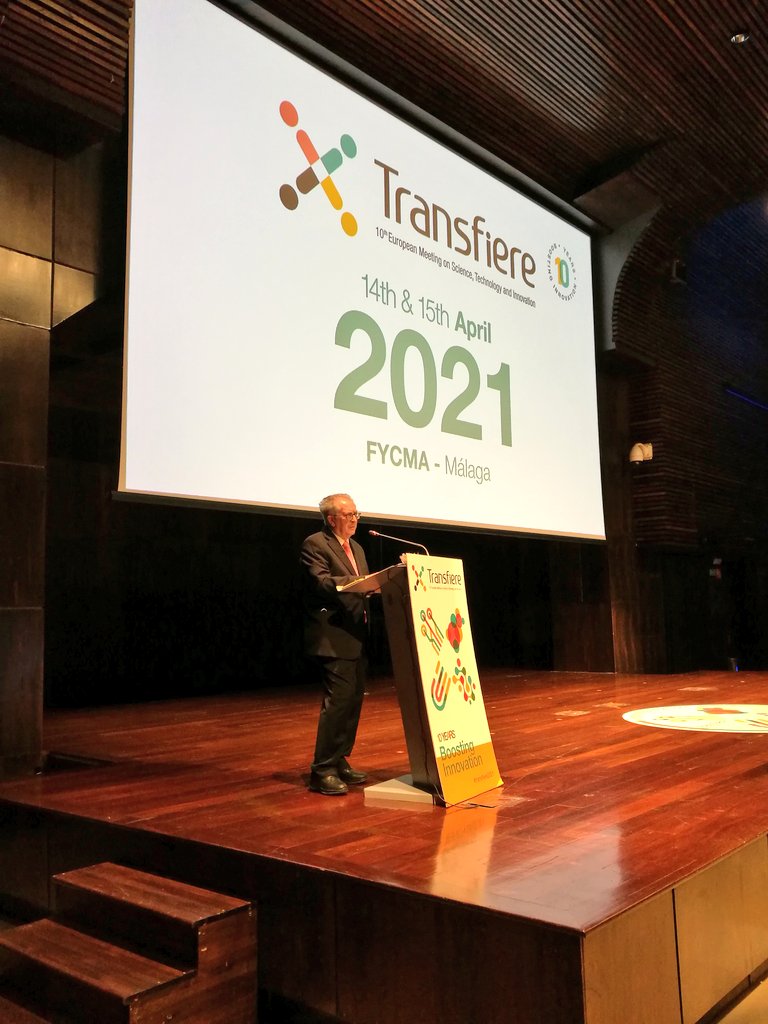 Malaga, 15th April, 2021-. On Wednesday 14th April the tenth edition of Transfiere, the European Forum for Science, Technology and Innovation was inaugurated at the Malaga Trade Fair and Congress Centre. This is a professional and multi-sectoral forum held every year in Malaga whose main objectives are to promote innovation and competitiveness in the business sector, to encourage the transfer of knowledge between the scientific and business spheres, to serve as a meeting space to publicise new products and services and to generate business opportunities and B2B alliances.

Transfiere has presented a multidisciplinary programme that has brought together, on this first day, more than 200 leading voices from the national and international scene, more than 30 universities and more than 100 public and private entities through thematic panels and conferences divided into 5 different spaces: Science Room, Innovation Room, Technology Room, Open Innovation Area, Demo Center – TRL7, where participants were able to learn about opportunities for internationalisation, artificial intelligence, digital transformation and industry 4.0, research and funding, among others.

During the first day of the Forum, different stands were observed in the exhibition area of public and private entities, such as: Association of Science and Technology Parks of Spain (APTE), the city council of Malaga, The centre for Technological and Industrial Development (CDTI), the Spanish National Research Centre (CSIC), ICEX Spain Export and Investment, the Spanish Patent and Trademark Office (OEPM), the European Institute for Innovation and Technology in Health (EIT Health), Finnova Foundation, the International University of Andalusia (UNIA), the University of Malaga, the Algeciras Technological Campus Foundation, the University of Cordoba, the CPS Group, ACM services, AERTEC, PCT Cartuja, and Enisa, among many others.

At the inauguration of the event, which took place on Wednesday 14 April at 11:00 am, it was recalled thatTransfiere is one of the first events to be held in person in Spain with all the health safety measures available to make the event a safe place. The organisers expressed their interest in making this year a year of innovation in science and technology.

Felipe Romera, president of the Transfiere Organising Committee and president of the Association of Science and Technology Parks of Spain (APTE), alluded to the Spanish king, Felipe VI, in his capacity as honorary president of this tenth edition of the forum and stressed that “10 years after the first edition of this forum, it has become the main science, technology and innovation meeting in southern Europe, with the aim of connecting research talent with the business ecosystem”. Romera thanked all the entities present for their presence and recalled that “vaccines serve as an example of the union between science and technology and their transfer allows the well-being of citizens”.

This was followed by the keynote lecture “Start-up Planet” by the expert in innovation and disruptive technologies, Juan Martínez Barea, who spoke about his vision of what is going to happen in the coming years and stated that “innovation will play an essential role in a world that will be much more technological”. He also recalled that “start-ups are going to build the world of the future and revolutionise dozens of sectors, from health to energy and agri-food“. 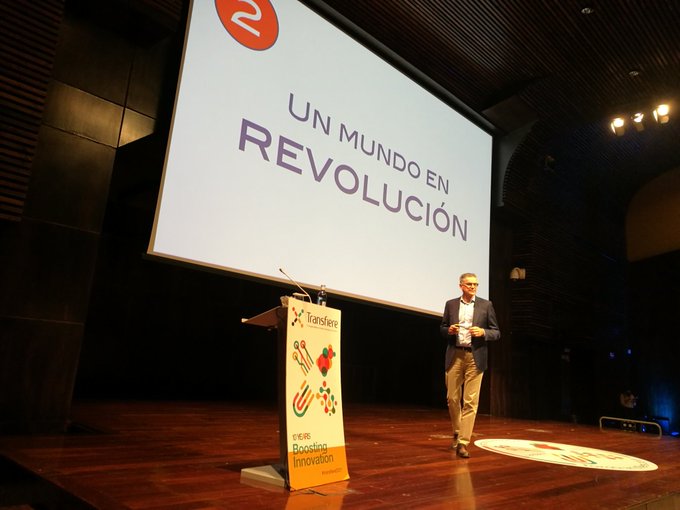 Photograph of the master conference “Planeta Start-up” by the expert in innovation and disruptive technologies, Juan Martínez Barea.

For his part, Francisco de la Torre, Mayor of Malaga, alluded to the different challenges such as “health, environmental commitment, and digitalisation” and spoke of the opportunity provided by European funding.“Public-private collaboration is essential for all the challenges of the present and the future, and Transfiere Forum is a good and clear example of this,” stated de la Torre in his speech. 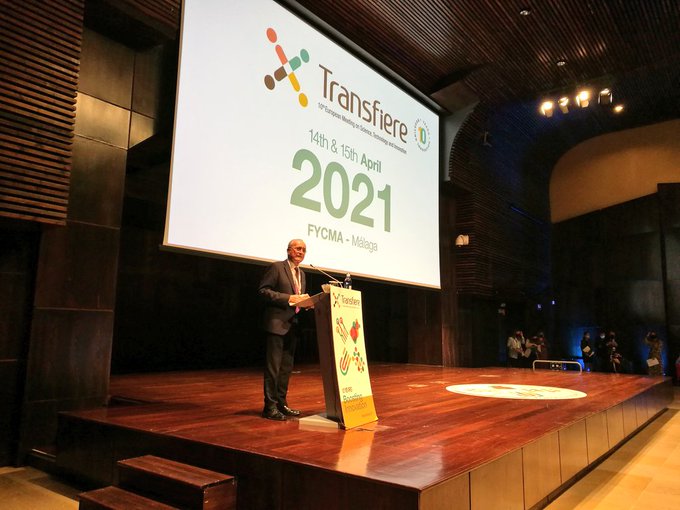 María Jesús Almazor, CEO Cyber&Cloud of Telefónica Tech, spoke of how “technology is increasingly changing and, therefore, we have to address digitalisation urgently”. José Carlos Gómez Villamandos, vice-president of the Transfiere Organising Committee and president of CRUE Universidades Españolas, stated that “it is not about transferring but sharing knowledge, between public and private organisations, companies and universities” and reminded that “Spain has to continue working to be a leading country in science and innovation”.

Teresa Riesgo, Secretary General for Science and Innovation of the Ministry of Science and Innovation (MICINN), referred to the Next Generation EU funds “which are being presented not only as a recovery plan, but also as a transformation plan”.  Pedro Duque, Minister of Science and Innovation, did not want to miss the event and did so in a non-presential way through a video in which he stated that “we are the tenth world power in scientific production and we are climbing fast in the innovation rankings” and recalled that in Transfiere all the public and private entities that depend on this ministry have presence and visibility. 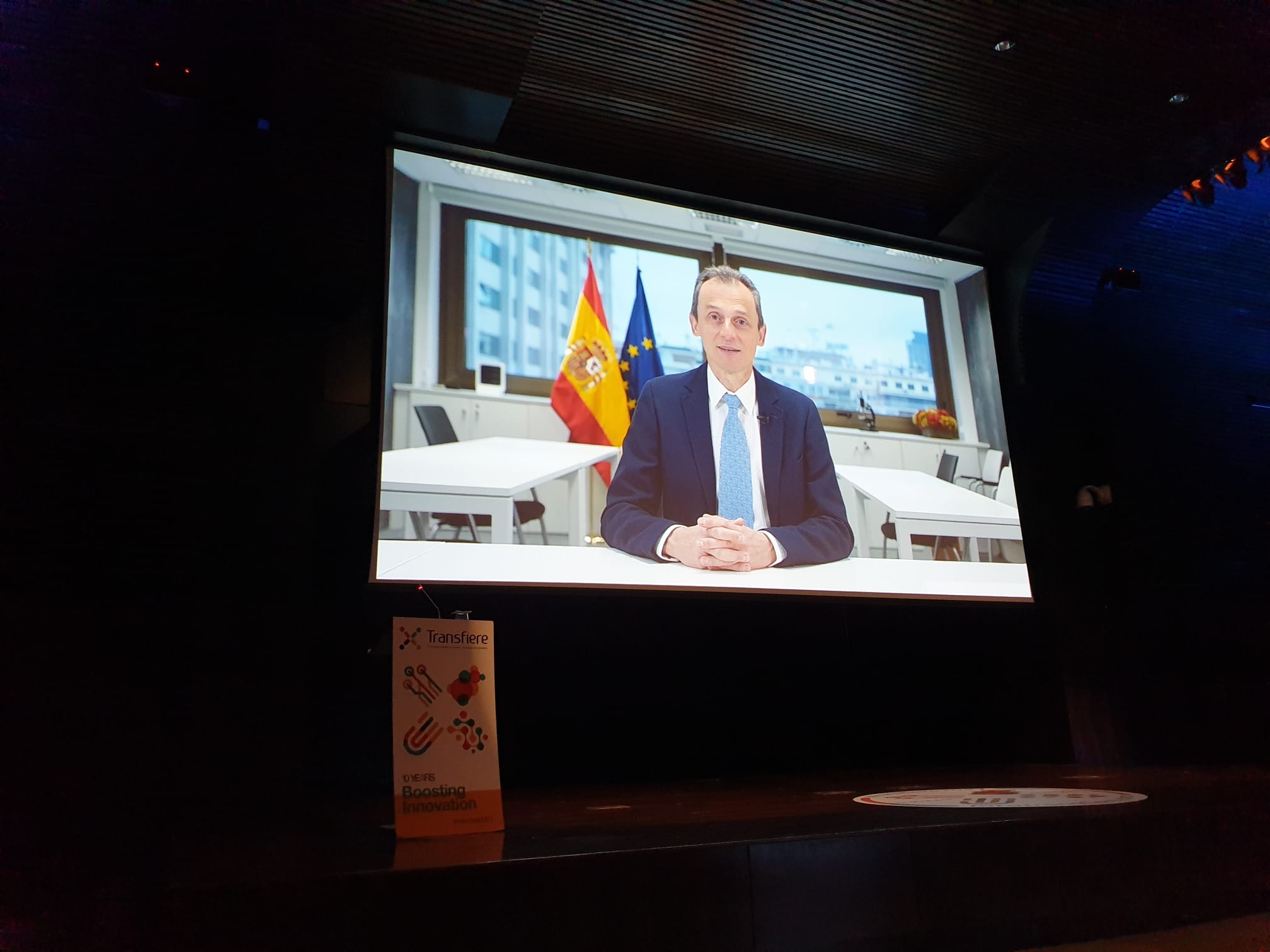 Finally, Juan Manuel Moreno, President of the Andalusian Regional Government, closed the opening ceremony by stating that “the Andalusian government is trying to promote talent through knowledge to face an unparalleled crisis” and recalled that events such as Transfiere “are a valuable instrument for Andalusia, to build the great opportunities that are presented to us in terms of innovation”. 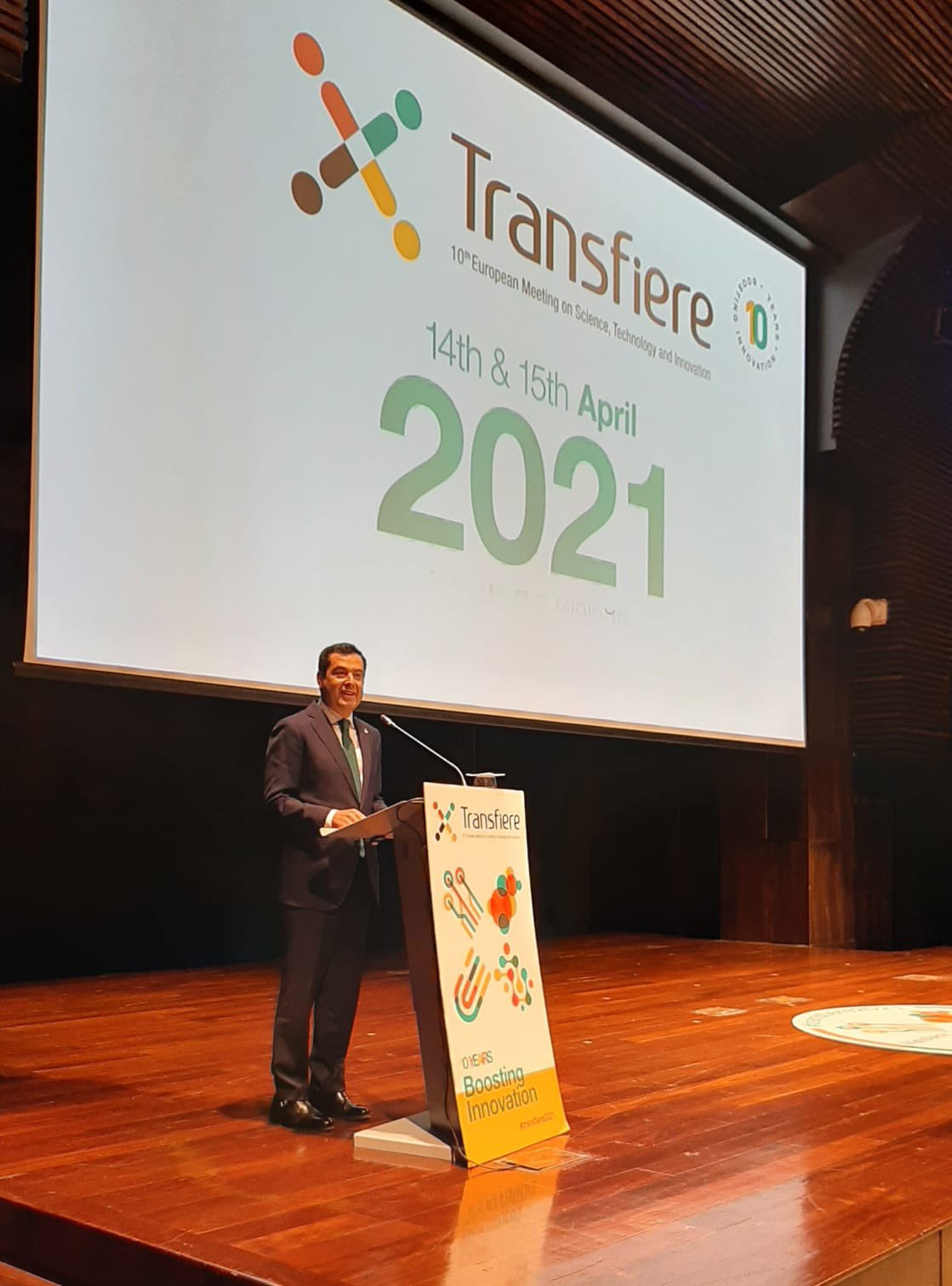 Juanma Revuelta, director and founder of Startup Europe Awards (SEUA), an initiative of the European Commission implemented by Finnova since 2016, was part of the evaluation committee of the “Open Call for deep tech & deep science Start-ups”, coordinated by the Enterprise European Network (EEN), which was held on Wednesday 14 April in the afternoon and whose awards ceremony will take place one day later, on 15 April, in the Open Innovation Area from 10:45 to 11:30. In addition, the Finnova Foundation will award two acceleration tickets worth €5,000 to the most disruptive startups.

Thanks to this call, national and international start-ups with deep tech and deep science projects had the opportunity to increase their visibility to national and international investors who are experts in the sector. In this tenth edition of the Malaga meeting, the work of journalists and disseminators specialised in technological innovation in Spain was also rewarded, and for this reason, on 15 April, the awards of the 6th edition of the ‘Foro Transfiere’ Journalism Award for Supporting Scientific, Technological and Innovative Dissemination, worth €3,000, were presented.

Two innovative municipalities were also present at Transfiere: Vilamarxant (Valencia) and Coria del Rio (Andalusia). Together with the Finnova Foundation, they launched a few months ago the open innovation programmes Accelerathon: Rice Straw in Coria del Rio on the challenge of the circular economy in rice straw and Waste2Energy in Vilamarxant on the energy use of waste.