“ExIt”, is a system that uses magnetic particles for the elimination and recovery of microplastics present in waste water that avoids discharge into the environment and contributes to the circular economy model. 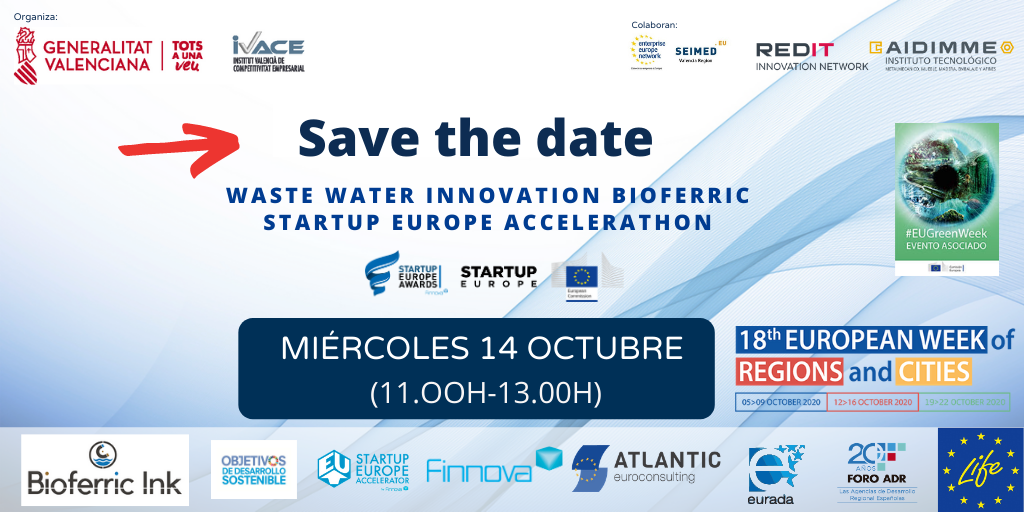 On 14 October 2020, the Finnova Foundation, the Valencian Community IVACE and Bioferric will officially present the winning IVACE Water Startup Europe Accelerathon project in the field of water: “LIFE EXIT “Extracction Microplastic”. The event will take place between 11:00 and 13:00 and is part of the European Commission’s European Week of Regions and Cities and Green Week.
The Generalitat Valenciana has adopted a clear leadership position in the dissemination, monitoring and implementation of the Sustainable Development Goals (SDGs) in its territory. The Agenda 2030 for Sustainable Development, approved by the United Nations, has marked a new global paradigm through the implementation of a new development model which highlights the strategic role of Local and Regional Governments, social and economic actors in these territories and their Associations in tackling these challenges.
Different plans have been developed to raise awareness, to integrate the ODS in its context of action, to create alliances with municipalities, cities and universities in the Valencian Community, as well as to work with civil society organisations. An example was the success of the IVACE Water Startup Europe Accelerathon held last June, where the winners were Bioferric Ink. With its Acceleration Ticket award, this event was held within the framework of both GreenWeek and EURegions. In addition to the presentation of the LIFE EXIT “Extracction Microplastic” in July within the Environment and Resource Efficiency section, for which they will be eligible for a total of up to 2 million euros per project subsidised by the LIFE programme, with the help of experts from the Finnova Foundation for its drafting; and also awarded the CaixaBank “New Business Ideas” prize, which grants 3,500 euros to the best project presented by professional training technicians.
Water and microplastics

The presence and increase in the quantity of microplastics in aquatic environments is a global reality, affecting both living organisms and the environment itself, and is largely motivated by the ‘throwaway’ lifestyle implemented in today’s society. If until recently the source of the problem was the rubbish of large plastics (up to 270 billion tonnes in the oceans), since the last third of the last century the fragments of plastic, fibres and granules, known as microplastics, have been seen as a new type of pollutant of emerging environmental concern in its own right.

Microplastics generate a large number of environmental impacts, especially when they reach continental or oceanic waters, but they are also detected in waste water and even consumer water, although in the latter there is no known risk to humans to date.

Circular economy
The volume of treated water is growing every year due to the scarcity of this resource. Each time the water is reused for other functions. To this end, a tertiary treatment of the waste water is carried out in the Wastewater Treatment Plants so that this water can be used in different applications such as crop or garden irrigation. However, not only the water bodies are reused, but also the sludge. That is, following principles of circular economy, the idea is to recirculate the waste produced when treating water and convert it into energy or resources to close the cycle of water use and management.

Apart from showing the success of this first Accelerathon, companies with high experience and innovative technologies related to the treatment of waste water will participate. All of this will take place within the framework of the Agenda 2030 policy for achieving sustainable development objectives and under the new legal framework for wastewater treatment.

Link to register for the event:

European Week of Regions and Cities 2020
The European Week of Regions and Cities (#EURegionsWeek) is an event held in Brussels every year (this year from 12 to 15 October) that is mainly focused on regional policy. It is a communications and networking platform where regions and cities from all over Europe come together through different political representatives, officials, experts or academics.
This year the main themes will be: Green Europe; Cohesion and cooperation; Empowering citizens.

There is the option of organising parallel events in digital form related to the themes covered in #EURegionsWeek between 5 and 9 October , 12 and 16 October, or 19 to 22 October 2020

European Green Week 2020:
EU Green Week 2020 will take place from 19 to 22 October 2020 and will focus on nature and biodiversity. Following the adoption of a new EU Biodiversity Strategy for 2030 in May, Green Week will emphasise the contribution that biodiversity can make to society and the economy, and the role it can play in supporting and stimulating global recovery from the pandemic, creating jobs and sustainable development. European Green Week is an event convened by the European Commission’s Directorate-General.

Bioferric:
Winner of the IVACE Water Startup Europe Accelerathon
Bioferric is a company focused on the management of projects aimed at the treatment and/or revaluation of waste produced by both the industrial and urban sectors. They carry out this work based on cutting-edge technologies whose potential and effectiveness are studied and developed in the laboratories where their headquarters are located, the Science Park of the Miguel Hernández University.

Accelerathon:
Accelerathon is a programme for accelerating innovative projects promoted by the Finnova Foundation. This methodology of the Finnova Foundation aims to find solutions and funding, through an applied open innovation online system that brings together the innovative ecosystem in the environmental sector, in which the European Commission works in the framework of the LIFE programme.

http://accelerathon.eu/
IVACE:
The Valencian Institute of Business Competitiveness (IVACE) is a public body belonging to the Generalitat Valenciana, attached to the Regional Ministry of Sustainable Economy, Productive Sectors, Trade and Labour of the Generalitat Valenciana.
IVACE is responsible for promoting policies to encourage innovation and offering support to industrial SMEs (small and medium-sized enterprises) in the Region of Valencia. It provides aid to companies and non-profit organisations that collaborate with SMEs in different areas such as: technology and R&D, quality and environment, training and technological cooperation or development and creation of companies.

Finnova Foundation:
European Foundation for the financing of Innovation. Based in Brussels, Madrid, Catalonia, the Basque Country, Valencia, Andalusia and the Canary Islands, its objectives are to promote public-private cooperation through innovation to address social challenges such as employment, training, entrepreneurship, the United Nations’ ODS, water, waste, fire fighting, the circular economy, etc.