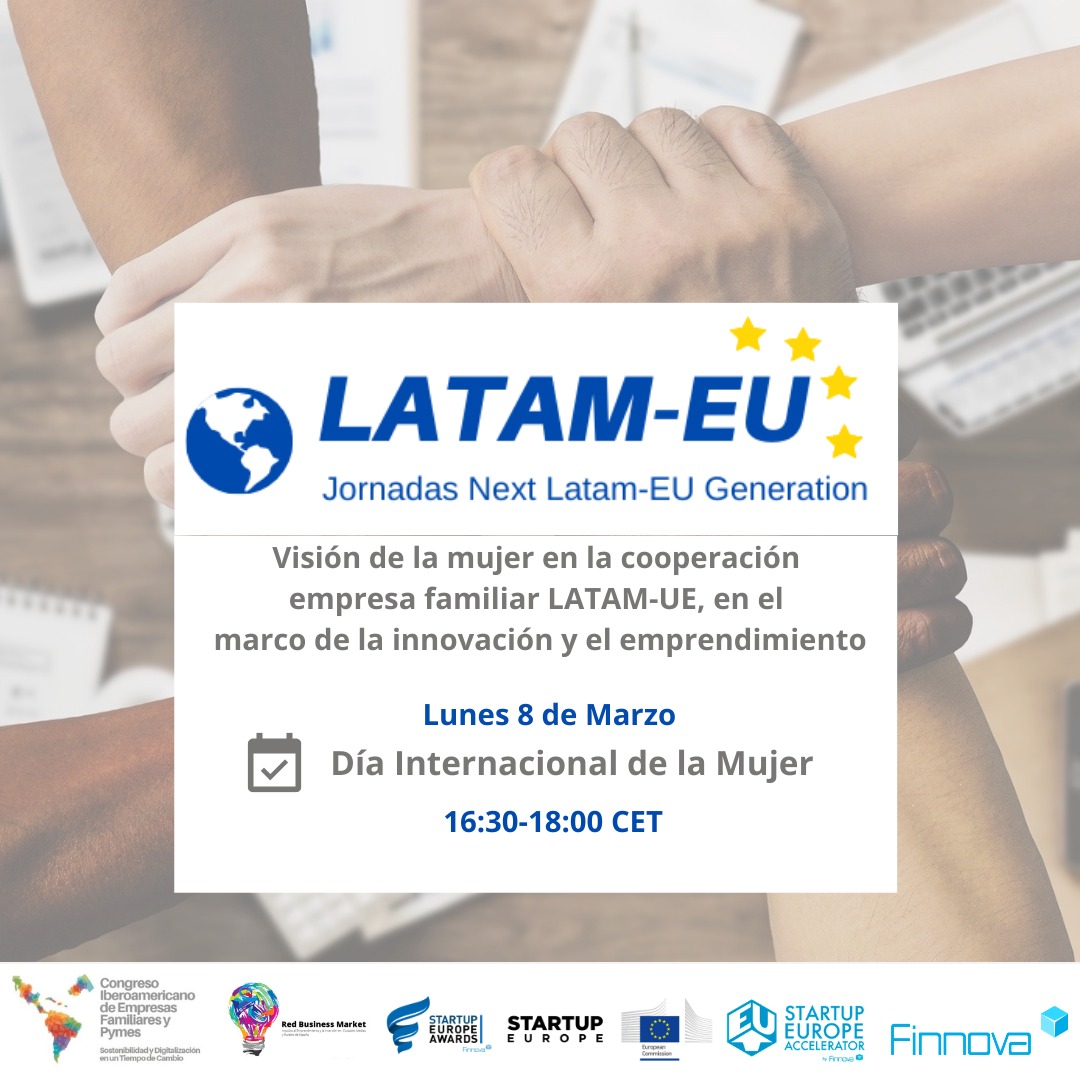 Banner of the first #NextLATAM-EUGeneration workshop

Brussels, 09.03.2021 – On the 8th March, coinciding with International Women’s Day, Finnova Foundation, in collaboration with Red Business Market, the Iberio-American Congress on Family Business and SMEs, Technovation Girls Valencian Community and Womanation Congress, has launched the first day of the series Next LATAM-EU Generation, that sums up a total of 9 online workshops that will be hold on the second Monday of each month corresponding to an international day linked to the United Nation’s SDG.

Next LATAM-EU Generation was born after the success of the Ibero-American Congress on Family Businesses and SMEs, organised by Red Business Market, which took place last January. With the participation of 558 companies, more than 60 national and international speakers and almost 9000 companies attending, which reflected the need for transatlantic collaboration to face common challenges in the two continents, such as digitalisation or sustainability among others.

The training workshops Next LATAM-EU Generation are aimed at transferring knowledge, approaching the financing mechanisms available between Latin America and Europe, promoting entrepreneurship and innovation, and building projects on both sides of the Atlantic in order to create business alliances through business cooperation and public-private collaboration, based on the SDG approach.

The first day, which took place today from 16:30 and 19:00h (CET), was led by Lola Bordás, president of Asociación Fundadoras and CMO of Finnova Foundation. Before giving way to the institutional block, the first one, Bordás emphasised “the need to empower women, since there is still great inequality between sexes, just as the official figures show”. 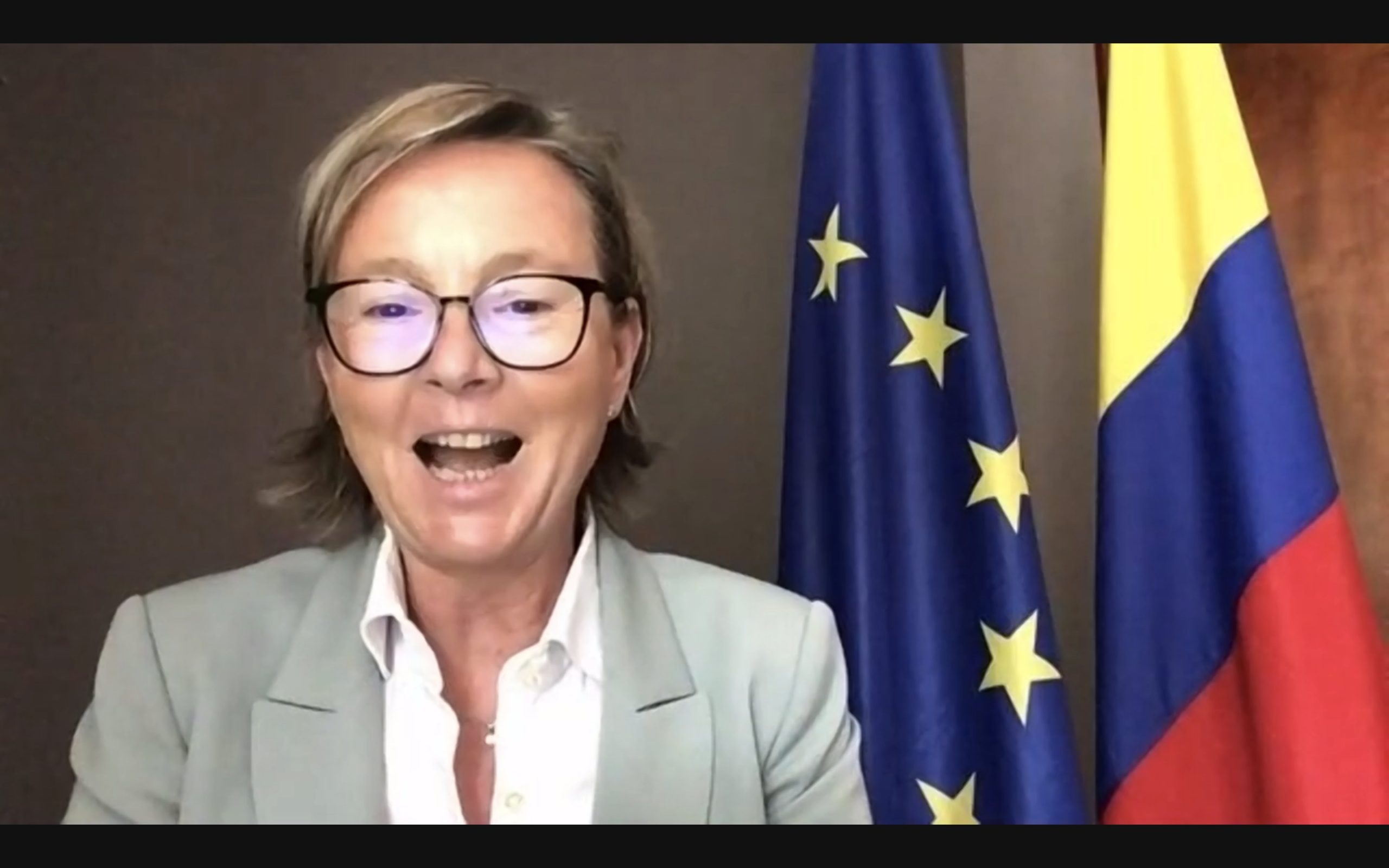 Patricia Llombart, EU Ambassador to the Republic of Colombia

The institutional block started with the presentation of Patricia Llombart, EU ambassador to the Republic of Colombia, who stated that “women are powerful agents of change and that’s why the European Union wants to put the gender equality agenda at the centre of the preparation of recovery and resilience plans after the pandemic caused by Covid-19″. This was followed by a speech by Liskel Álvarez, councillor for external action of the Cabildo of Tenerife, who recalled that “gender equality is not only a fundamental human right, but also one of the essential foundations for building a peaceful and sustainable world, as set out in the United Nations 2030 agenda“.

Within the same block, Lourdes M. Pérez, export manager at ProPanamá declared that “this day is key for women to make progress in cooperation; we have to continue working so that women have leadership in the field of investment”. Finally, Adriana Vargas, Head of the Trade Section of the Colombian Mission to the European Union, also wanted to show her support by explaining what is Ideatón Global AFS, an opportunity for people who believe in international education and who wish to participate in shaping their future by encouraging creativity and the exchange of ideas.

At around 17:00, the first One to One of the day began, a short interview between Lina Palma, communicator and founder of the Comunica sin miedo workshops, who proclaims communication as a means by which women have managed to raise their voices, and Sara Picazo, journalist and freelance communication consultant, who states that “the day that we stop communicating on this day, the 8th March, will mean that we have moved forwards and have broken barriers and paradigms and, therefore, that there is finally equality”. Palma, during the closing of the interview, recalled three important premises when it comes to entrepreneurship: “passion, assertiveness, empathy”. 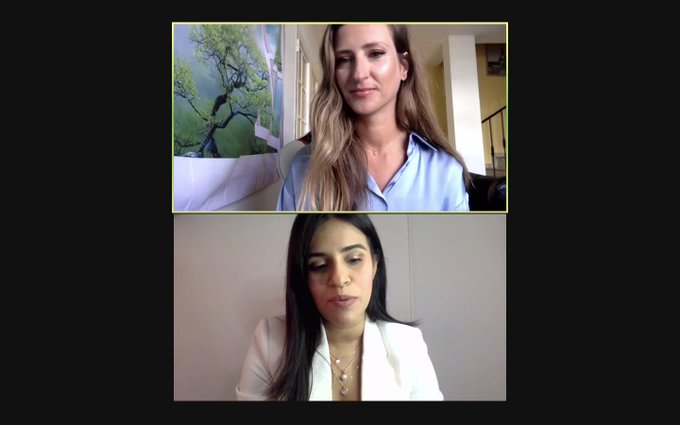 One to one between Sara Picazo and Adriana Palma

Block two, entitled “Women and Entrepreneurship” consisted of a round table discussion between nine influential women entrepreneurs from different Spanish-speaking countries. During less than one hour, the eight women moderated by Yohania de Armas, co-founder of Cuba Expertise, exposed their vision about the role of women in the LATAM-EU business cooperation within the framework of innovation and entrepreneurship. Before giving way to the speakers, de Armas stated that “these experiences serve as a reference so that women can see themselves reflected in our professional careers”.

This block counted with the participation of Mariana Memoli, social head of Mediapila Foundation, who recalled the importance of adding other aspects to the fact of being a woman: “being a woman, and being a poor woman, and being a migrant woman… other layers are added to this social problem”. For her part, Leslie Jarrín, founder of DayTwo Group and currently a member of Goctors Startup, highlighted the fact that “women are seen as an exception, despite the fact that many things we use daily like the wifi or some of the software we use is made by women” and adds: “we are underrepresented: history has not done us much justice. A lot of what wonderful women do on the technology sector still needs to be communicated”.

Mariana Costa, co-founder and CEO of Laboratoria, encouraged women to “develop their skills for the digital era” and that “day-to-day life becomes a way to put an end to the gender gap and not to make it even more pronounced in areas such as entrepreneurship”. For her part, Estefanía Castro, lawyer and gender expert, encouraged women to become entrepreneurs “because a woman who is an entrepreneur will never fail, since only the path is already a success” and stressed that “it is a very valuable work the one that we are all doing together to live in a fairer and more equitable world”.

Ruth de los Reyes Cánovas, CEO of Microbiotech SL, a company accelerated by the CEI Túria (Vilamarxant, Valencia) and which has achieved, thanks to the Finnova Foundation, the Seal of Excellence of the European Commission’s Horizon Europe programme, upholds that “entrepreneurship has turned out to be a way forward after and despite many obstacles”. Patricia Suárez, consumer representative on the ASUFIN Advisory Council, points out that “in ASUFIN, most of us are women who want to change the relationship model between consumers and banks”.

Martha Lagunes, head of Strategic Planning at Startup Europe Awards México, spoke about women agro-entrepreneurs: “we are a minority, but a minority increasingly stronger and with more tools”.  “Through the SEUA, we are launching a call where, through an open innovation competition, precisely what we are promoting is to make a call to the entrepreneurial sector”, Lagunes continued. Finally, as a final touch to this block, Angélica Gómez, dean of the Official College of Industrial Technical Engineers (COGITI) of Valencia, said that “it is essential that there are role models and that limits are not set for us, that we can be what we want to be”.

Angélica Gómez, dean of the Official College of Industrial Technical Engineers of Valencia

The third block, entitled “Women in European projects“, focused on the importance of the available funding mechanisms for entrepreneurship. To this end, four projects were presented: IP SME Helpdesk LATIN AMERICA, an assistance service for European SMEs/COSMEs which operate or intend to access the Latin American market to improve their global competitiveness, presented by Nicoletta Favaretto, senior project officer at Eurochambres.

Beatriz Martínez, CMO Firefighting Open Innovation Lab – Interreg CILIFO, the project that has obtained the biggest funding in the history of the European Union (24.5 million euros), spoke about this forest management plan, which fights against climate change through innovation for the prevention, action and recovery of burnt areas. For her part, Ángela Baeza, IDi -Wastewater technician at Global Omnium, presented the LIFE Ecodigestión 2.0 project, for the energetic use of wastewater treatment plants by treating putrescible organic waste. Finally, Flora Marquez, from Next Textil Generation, spoke about Circoax by Circular Innobooster, a project that aims to bring the circular economy to the textile sector. 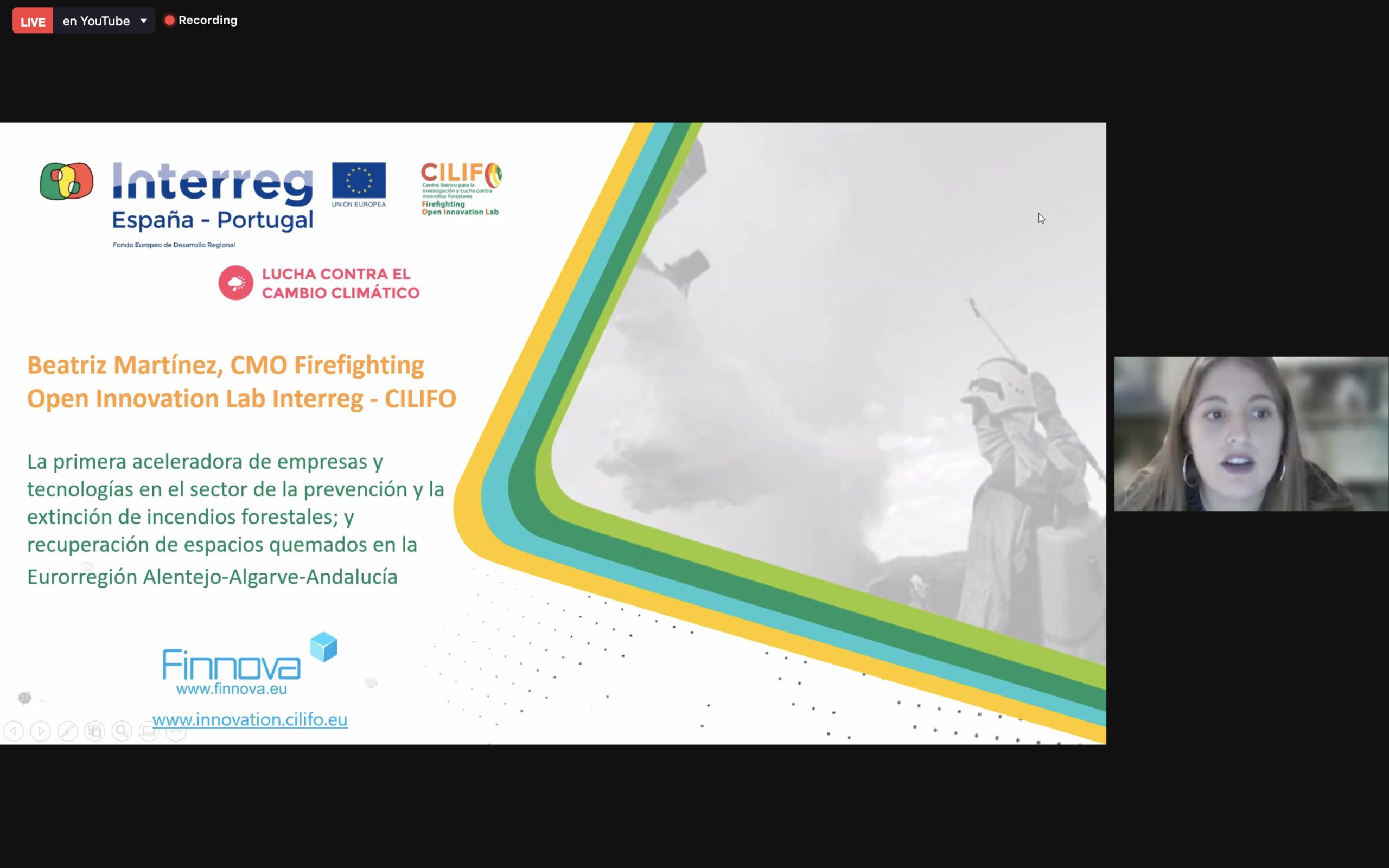 Afterwards, there was another One to One, this time between Paola Gutiérrez, Next Talent Youth, and María José Valero, CEO of Talent Growth Management, who emphasised “undertaking actions that are different, that fit the current world, how our young people live, and that help us to change the narrative”, which closed the first day of the Next LATAM-EU Generation series. 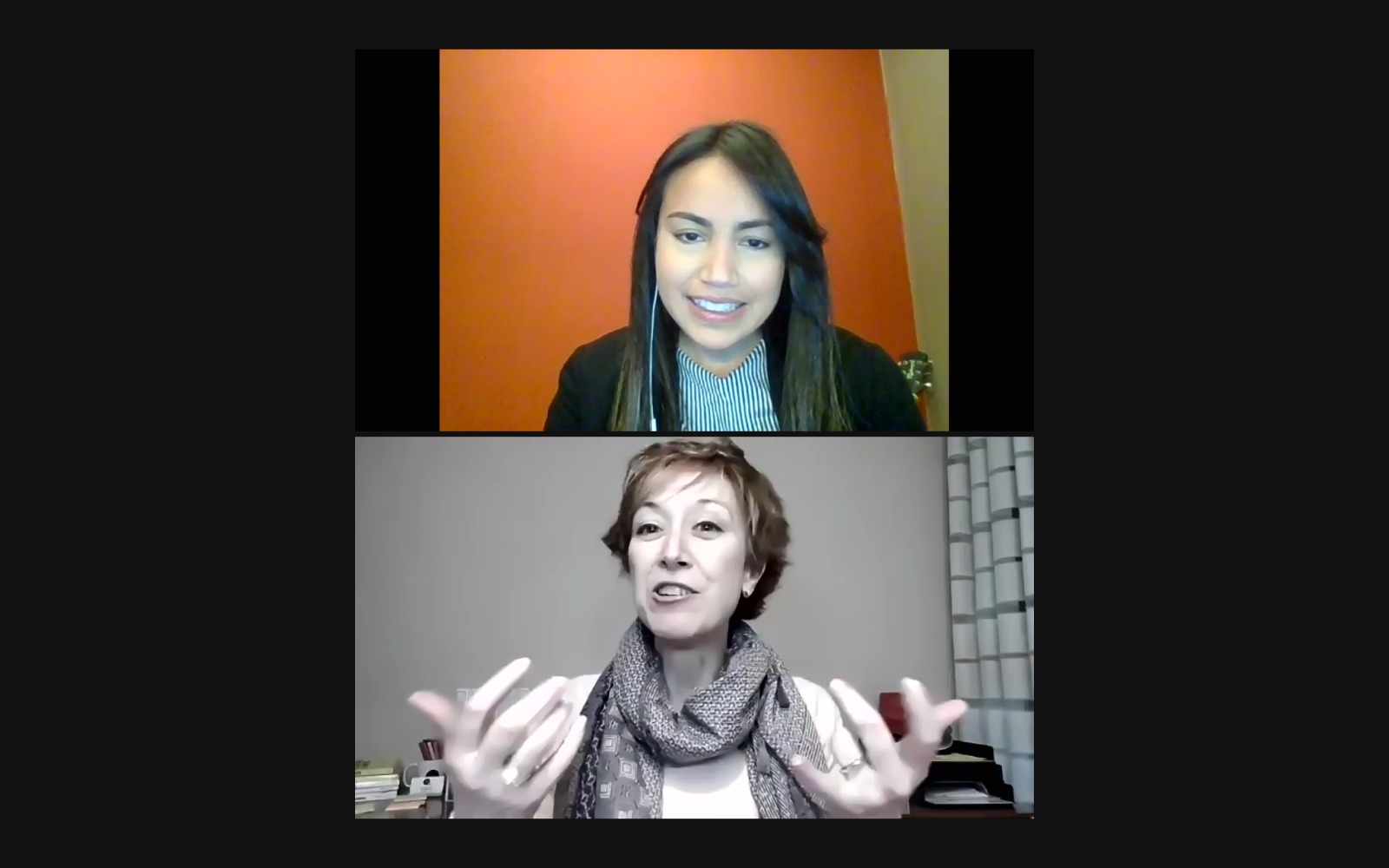 The series, the first day of which involved Colombia, Peru, Argentina, Cuba, Spain, Italy, Panama, Mexico and Ecuador, will end at the end of this year with a face-to-face meeting in Medellin (Colombia) for the celebration of the LATAM Startup Europe Awards -if the health situation allows it-, a methodology of the European Commission’s DG Connect, implemented by the Finnova Foundation since 2016 and whose main mission is to help Startups and Scaleups to be more efficient, intelligent and successful from a sustainable approach.

During her speech, Martha Lagunes conveyed her wish of “wanting to encourage the creation, assistance and formalisation of an entrepreneurship system in which there are support networks that are even more strategic for our sector”. There is still much to be said about the different financing tools available to all LATAM-EU entrepreneurs. These include the European Commission’s Horizon Europe, whose main areas of action are medical research against cancer and sustainability and the fight against climate change; and the EUROCLIMA+ programme, financed by the EU, which supports Latin American countries in strengthening their climate governance through the design, updating and implementation of climate policies that allow them to have legislation and plans adapted to their realities. 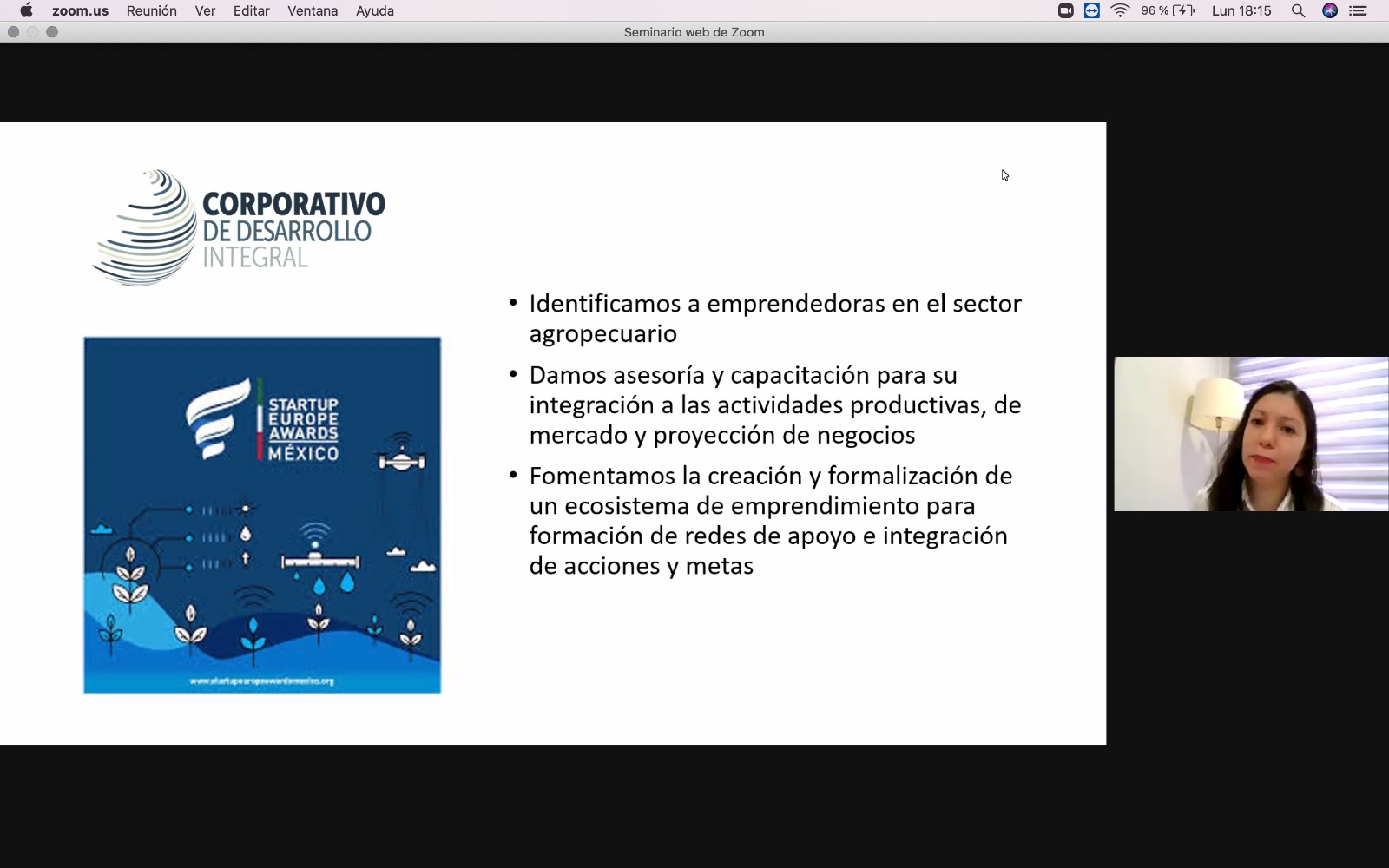 The European foundation for innovation funding. It is a European foundation based in Brussels whose objectives are to promote public-private cooperation through innovation to address social challenges such as employment, training, entrepreneurship, the United Nations SDGs, the circular economy, etc. Finnova organises the Startup EuropeAwards, an initiative of the European Commission and the Finnova Foundation, to recognise the best European startups in the social field. www.finnova.eu

It is a methodology of the European Commission DG CONNECT, implemented by the Finnova Foundation since 2016. The SEUAs are an open innovation tool for identifying disruptive startups that promotes public-private collaboration and raises awareness of the importance of self-entrepreneurship as a driver of employment. In addition to generating alliances that help to meet the SDGs of the United Nations and the actions of the European Green Deal, thus contributing to the circular economy, the fight against climate change and sustainable tourism. http://startupeuropeawards.eu/seua/

Business Market is a connection forum between investors, companies, entrepreneurs and startups in Ciudad Real whose objectives are the generation of a business network, financing and support for the development of economic and business projects in the territory. All this, hand in hand with the possibility of being able to have a direct relationship with venture capital funds, business angels, family investment assets and corporate or financial funds addressed to innovative, disruptive and value-added initiatives that need an economic boost to its development.

About Ibero-American Congress on Family Business and SMEs

The Ibero-American Congress on Family Business and SMEs responds to the challenges that the sector of economy and businesses must face after the outbreak of Covid-19. It is a space for synergies, connections and exchange of knowledge between family businesses and SMEs of reference in different fields and productive areas.

Womanation Congress, a national digital congress with women’s voice addressed at the whole of society, to inspire new generations and motivate the current ones with real talent, current references and attractive projects, from Education, Business, Science, Technology and Innovation.

Technovation Girls, promoted by Talent Growth Management in the Valencian Community, is the largest technology entrepreneurship programme/contest for girls worldwide launched by the American non-profit association Technovation. The programme challenges 10- to 18-year-old girls to create a mobile application that solves a social problem within their community, carry out the market study, marketing plan, business plan and present it to the jury.