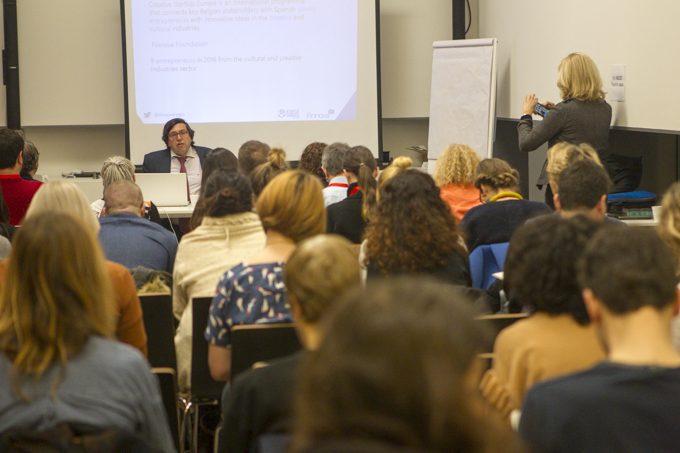 Madrid, 23th March. The call for country and local organisers of Creative StartUp Europe Awards 2017 was launched today in Madrid at the European meeting “How to start me up. Building my creative hub” organised and hosted by Factoria Cultural and supported by the European Creative Hubs Network funded under the Creative Europe Cross-sectoral strand. The project set up a Europe-wide network of creative hubs for cultural and creative professionals and entrepreneurs. The ECHN Skills Workshop is the first one in a series of three workshops which aim to build the professional capacity of creative hub leaders by developing tailored support and skills development tools.

During the meeting “How to start me up. Building my creative hub”, the CEO of Finnova Foundation and the StartUp Europe Accelerator, Juan Manuel Revuelta invited the creative community to participate in the Creative StartUp Europe Awards 2017 through the StartUp Europe Awards Alliance. The aim of this award is to recognize the best startups working on cultural and creative projects in its broadest sense (visual arts, architecture, audio-visuals, literature, music, design and fashion), taking into consideration the originality of the project and its subsequent implementation. Moreover, the projects must pursue a transnational geographical dimension, successfully reaching a European or even global dimension.

The open call is to organise an award at local, county, regional or national level to recognize these creative startups in their countries. The call is also open to Creative Media Partners, who could provide visibility and follow the progress of the participants and for Creative Ambassadors to Members of the European Parliament who could provide institutional support and invite a group of creative startups to visit EU institutions. Regarding this support, European Parliament presented a resolution on coherent EU policy for cultural and creative industries on December 2016.

More than 20 local events and 14 national awards have been celebrated under the frame of StartUp Europe Awards in 2016 with 91 startups awarded. 18 media partners from all over Europe have been making more visible the progress of the initiative as The Independent Ireland or Emprende TVE for Spain.

StartUp Europe Awards is promoted by the European Commission and supported by the President of the Committee of the Regions, several members of the European Parliament as Ambassadors and it is implemented by Finnova Foundation in collaboration with Startup Europe. Its aim is to identify local models that serve as an example to new entrepreneurs and for public institutions to develop programs to promote them.

StartUp Europe Awards works as well as a methodology of open innovation through public-private partnerships that allow public entities to find a solution for their local challenges and startups to prove their innovations in pilots supported by European funding.

StartUp Europe Awards is creating as well an Alliance gathering the organizers of startup awards (accelerators, universities, consultors, businesses angels) all around Europe and beyond, being a forum for the interchange of best practices and networking amongst all the players involved in the European ecosystem.

The winners of the European final of StartUp Europe Awards will gain huge visibility across Europe and access to a mentoring programme (on European funds as SME Instrument from 50000 € to 2.5 M €, communication, lobbying, etc.), through Finnova Foundation and the partners of the StartUp Europe Awards, allowing them to develop their projects and make them more viable at a European level.

Creative StartUp Europe is an international programme that connects key Belgian stakeholders with Spanish young entrepreneurs with innovative ideas in the creative and cultural industries. To know more about this initiative please visit

A creative hub is an infrastructure or venue that uses a part of its leasable or available space for networking, organisational and business development to the cultural and creative sectors. Many co-working spaces in the creative sector refer to themselves as “creative hubs”.

By facilitating co-creation, Creative hubs can help to make out the most of the sharing economy. In some countries, creative hubs also provide valuable solutions to the high rates of youth unemployment by providing not only an inspiring working environment and useful contacts but also to provide an innovative business environment for cultural and creative start-ups. The increasing attractiveness of the concept of creative hubs in the EU can help breathe new life into declined industrial areas, enhance tourism and investment, provide educational opportunities as well as cultural and creative spaces. The project also set up some business support measures as well as a peer-to-peer hubs exchange programme to enhance concrete project development and cross-country learning.